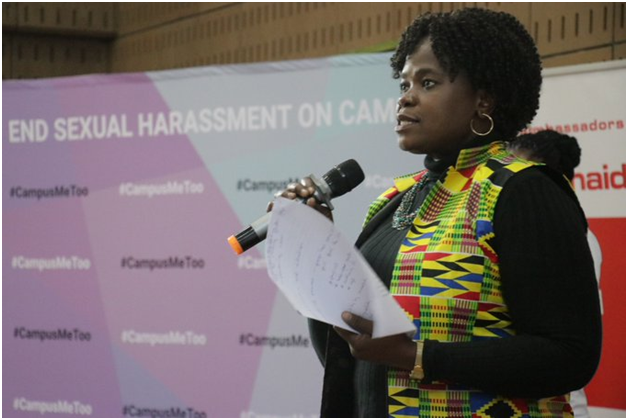 University students in the Kenyan capital, Nairobi, have launched a campaign to end sexual harassment in the country’s higher learning institutions.

A recent survey in Nairobi by the campaign group ActionAid suggests that half of all female students and a quarter of all male students have experienced a form of sexual harassment from a staff member at their university or college.

Under the hashtag #CampusMeToo students are gathering signatures for a petition that will be handed to the education ministry.

Among their demands are mandatory induction sessions for newly enrolled students, regular training sessions for university staff and the appointment of an investigation committee on all campuses to handle sexual harassment cases.

The youth in institutions of higher learning in kenya are speaking out! & standing up against sexual harassment!

“If education is the key to prosperity, then we need to ensure that the learning spaces are safe and free from sexual predators. This is where we draw the line” @annamutavati#CampusMeToo

This is not happening only in Kenyan universities.A lecturer at Makerere University was recorded by his student vigorously asking her for sex or else set a hard exam paper and fails her. MedardTwinobuhungiro, a lecturer at the College of Business and Management Sciences, gave his student Anita Twinamatsiko a task of either giving him sex or failing her final exam.

He had driven her in his car from the main campus of Uganda’s most prestigious institution to Bwaise, a Kampala suburb and along Northern Bypass.

Along the bypass, Medard started negotiating for sex and telling Anita she cannot traumatise him.

“Whatever we talked about will stop here, don’t tell anyone,” he told her in a recording aired by Salt television.