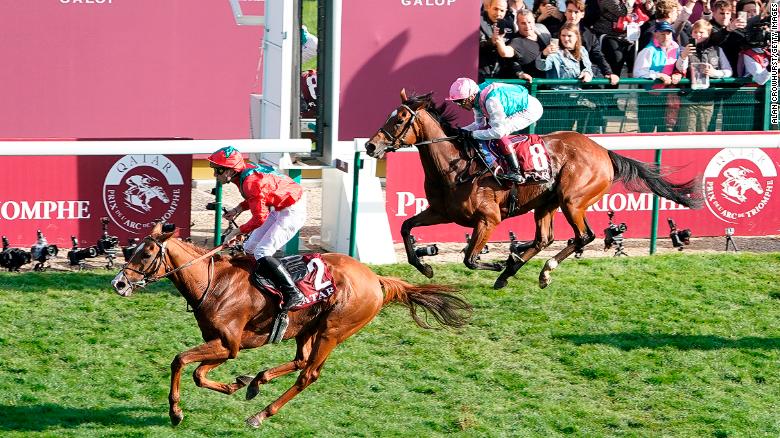 Shock and a large dose of disappointment fell on Longchamp as favorite Enable came up agonizingly short in her quest for an historic third straight Prix de l’Arc de Triomphe title.The mount of veteran jockey Frankie Dettori was the hot favorite to accomplish the unprecedented feat in Europe’s richest race, and with the line in sight it looked as if the roaring crowd would get its fairytale ending in Paris.But jockey Pierre-Charles Boudot and outsider Waldgeist — beaten three times by Enable in the past — stormed from fourth and flashed past the green and pink silks of Dettori and Enable on the line.Gasps and groans from the packed Longchamp grandstand told the story as the Andre-Fabre-trained Waldgeist, fourth last year, dashed Enable’s bid for immortality in racing circles.

Only eight horses have won dual Arcs, and previously only one of those had even attempted the three-peat — Treve was defeated by Dettori on Golden Horn in 2015.Enable, who has won more than $12 million in her glittering career, clinched her first Arc at Chantilly in 2017 — Longchamp was being redeveloped — and then triumphed again last year to cement her status as one of the sport’s greats.Her trainer John Gosden, based in Newmarket, England, told CNN’s Winning Post before the race that it was “a big ask” to pull off the feat, and there was a suggestion the heavy rain overnight in Paris may have affected the five-year-old in the haul for the line.”The ground had a lot to do with it,” a clearly devastated Dettori, 48, told a scrum of reporters after dismounting Enable in the parade wing.