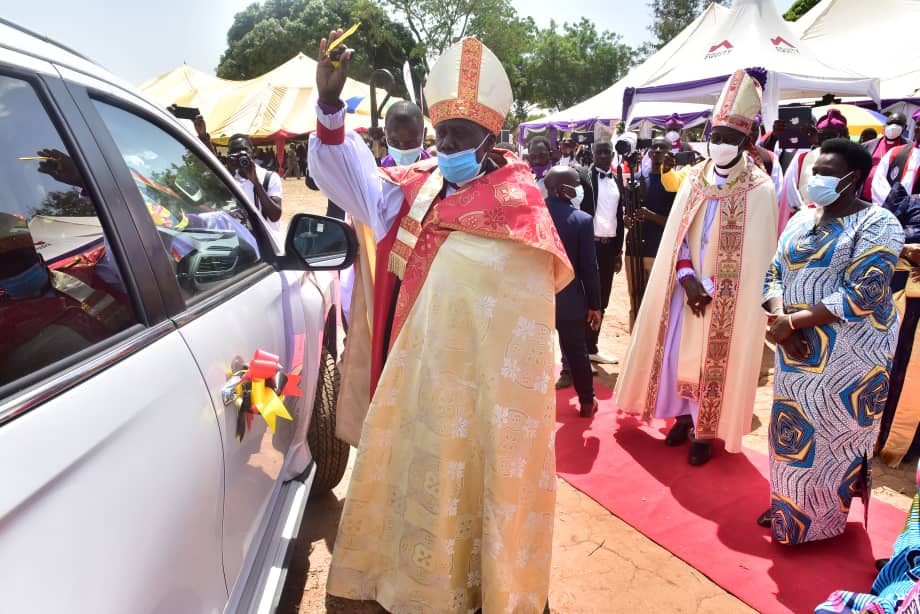 Mammoth numbers of Christians in Kumi diocese have gathered at St. Phillips to Cathedral Ngora to witness the consecration of Rev. Okwii Esakhan Michael, the 2nd Bishop of Kumi diocese.

The consecration was characterized by reading of the minutes at which the Bishop elect was chosen by the House of Bishops on 9th Feb 2022.

At the time Rev. Okwi was elected three Christians including a cleric under Kumi Diocese had petitioned Soroti high court seeking a permanent injunction against the planned consecration of Rev. Michael Okwii Esakan, as their new Bishop.

The applicants are Nekemiah Akongel, Rev. James Opedun and Joseph Etoori. Through the lawyers of Mwebesa & Co. Advocates, the group has sued The Most Rev. Samuel Stephen Kazimba Mugalu, the Archbishop of the Province of the Church of Uganda for the alleged irregularities in the election of Rev. Okwii.

However, the above petition didn’t not stop the occasion from going on, as hundreds of christian including members of parliament and ministers attended the event.

Rt. Rev. John Charles Odurkami who has been the acting Bishop highlighted a number of challenges, including court injunction.

In his first message as newly enthroned, the Bishop preached peace and unity,calling on everyone to forge ways as Christ would do.

Archbishop Kazimba congratulated Bishop Okwii for taking on this challenging assignment saying that “the diocese of Kumi has had two years of unrest” and will need all help from the Government and everyone in all aspects.

President Museveni, in his remarks read by Vice President Alupo said he was happy to see a man of God take an oath of Spiritual importance and service to the People of God.

The President also hailed the relationship between the church and government , saying the church has seen development of communities at the grassroot level and has been a torch bearer in bringing forth socio-economic liberation of people’s mindsets towards change.

“Through the church, traditional barriers to development have been broken and others altered for the welfare of communities”, the President said.

The President donated a brand new Mitsubishi Pajero Sport, which was handed over by Vice President Alupo.