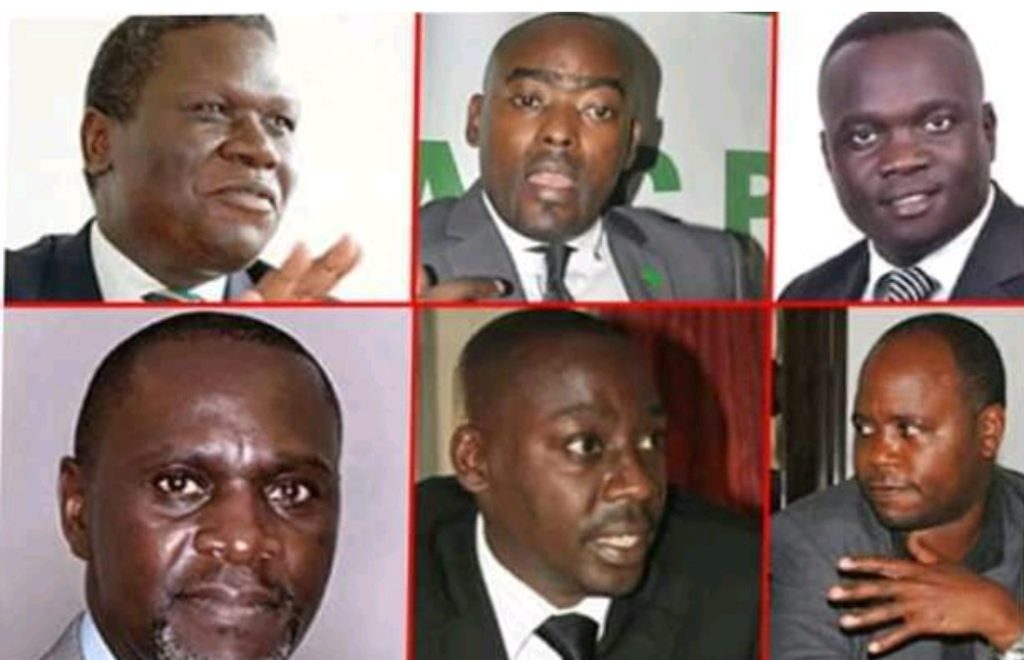 There is trouble in the Democratic Party Bloc which was created to unite warring political parties in Uganda, after President General Norbert Mao fell out with other members, who include, Mike Mabikke, Abed Bwanika, Lubega Mukaku and others.

Mao says he was shocked in a recent meeting to learn from Mabikke, Lubega and Bwanika that the trio had undeclared intentions to grab interim positions as opposed to co-existing as his equals, in a fashion similar to the Raila Odinga-Uhuru Kenyatta handshake, under which Odinga can only aspire for big things and never scheming for Ministerial positions under President Uhuru Presidency.

According to Ahmedie Nkonge, a renowned commentator,  Mao says that neither Mabikke nor Bwanika can become National Chairman or SG because they aren’t even party members in DP.

Mao and his Vice Mukasa Mbidde vehemently rejected this move, rightly arguing that it would escalate conflict in the party on the eve of the Delegates’ Conference slated for February.

Mbidde made his case by referencing on the Party Constitution which clearly guides on how and why the so-called DP Bloc Principals (Abed Bwanika, Mike Mabikke and Sam Lubega Mukaku), who were clearly interested in these top executive positions, can be become DP members and qualify for such offices.

Whereas Lubega has been a renegade DP member for long, Mabikke and Bwanika are technically not DP members because they lead their own respective parties (SDP and PDP) which EC secretary Sam Rwakojo says they have never dissolved.

Mbidde rightly submitted that the DP Constitution requires that to ascend to such a big office, one must have been an active DP National Council member for the preceding 5 years which the trio hasn’t been.

Mao now says instead of countering Mbidde’s argument, the trio and their supporters in the room “resorted to banging  tables because they had no case.”

He says; “They were afraid because facts and the law weren’t on their side hence resorting to shouting.” The PG says mere dismissing Mbidde as “Mufere like they did only made their case fail.” Norbert Mao recently inducts Chameleon into DP as MP Joseph Sewungu (who recently bashed him during a talk show at CBS) menacingly looks on. A long term Mao loyalist, Sewungu now says Nambooze has always been right in detesting Mao

“ON DP BLOC,/Mao says before the National Council session he reached out and called Lubega, Bwanika and Mabikke for a meeting during which he dissuaded them from targeting those positions because he knew they can’t get them under the DP Constitution. “I told them I have been so good to you. You are my equals as Principals but why are you dying for those interim positions?

I told them how I have been so generous to them allowing them to enjoy a lot of visibility at party functions. We have also been generously funding the reunion meetings [Shs60m each] which they have been in charge of.

I tried showing them the bigger picture of things. Ours was a hand shake similar to that of Raila Odinga and President Uhuru Kenyatta. Can you imagine Raila Odinga now begging Uhuru for a ministerial position?

I was magnanimous all through because I allowed them to enjoy privileges which aren’t even in the MoU. I reminded them all these things. Using our reunion money, they had been allowed full access to party structures…And I also reminded them that by the way much as I’m the Chief Executive, the Party Constitution is supreme and paramount over all these other things including the MoU.”

Mao says he feels the three DP Bloc Co-Principals have been ungrateful for nothing “because we have advanced them resources for the reunion [Shs60m per meeting] beyond what we can even give our NEC and it has all been because of my goodness because many of those things aren’t even in the MoU.”

He says during the Nakulabye National Council meeting he showed good intentions by challenging anyone to expose him if he ever engages in any plotting against colleagues on the eve of such big party meetings. “It’s always the strength of my ideas. If they are good, they carry the day. If they are bad, you deal with the rejection,” he said.

Mao claims his proposal for a grand anti-Museveni coalition have been ignored,  and he seems prepared to use the newly acquired DP Strategic Political Command Center at Nakulabye to run for President in 2021, which he says is his right and nobody can blackmail him not to.