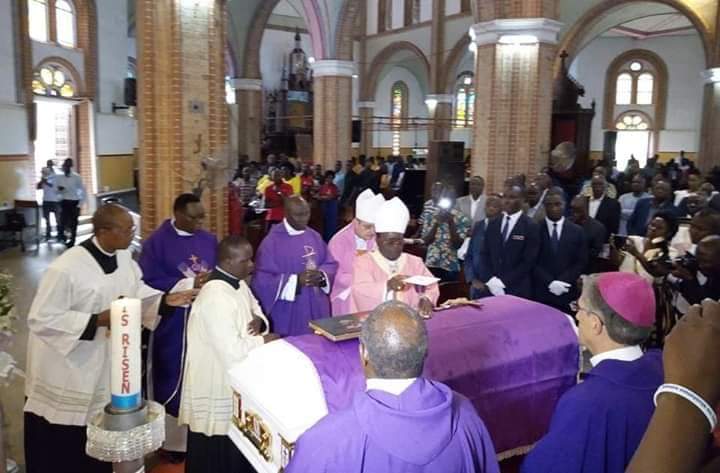 Mourners who attended fallen Bishop Henry Ssentongo’s requiem mass on Sunday at Rubaga Cathedral, were stunned after being told that the Bishop’s dying wish was that no mourner should lay a wreath on his coffin or grave.

He instead beseeched  the mourners, through his Will, to use their money to buy food and other necessities for the needy people across country.

Bishop Ssentongo,83, who was the retired Bishop of Moroto Diocese, died last Wednesday at Nsambya due to cancer.

Born in Kalungu District, Bishop Ssentongo went to Kalungu Primary School and Villa Maria Primary School before joining Bukalasa minor Seminary and later Katigondo Major Seminary where he stayed for only one and half years upon being granted a scholarship to Urban University in Rome in 1957.

He also pursued further studies in Switzerland and Germany where he earned a Masters of Philosophy, Theology, and in Law respectively.

He was ordained priest in December 1963 and served in different capacities under Masaka Diocese including being a private secretary to the Apostolic Nuncio to Uganda. From 1976 to 1980, he was rector of Bukalasa Seminary.

Ssentongo served as the secretary general of the Uganda Episcopal Conference from 1981 to 1988 when he was appointed the Titular Bishop of Pupiana and later named the Auxiliary Bishop of Masaka during the reign of Bishop Adrian Kivumbi Ddungu.

While in Masaka, among the notable roles he performed included ordaining to priesthood the reigning Bishop of Masaka Diocese Monsignor Serverus Jumba in 1992.

In 1992, Ssentongo was appointed Bishop of Moroto replacing the late Bishop Paul Lokiru Kalanda who had been transferred to Fort-Portal.