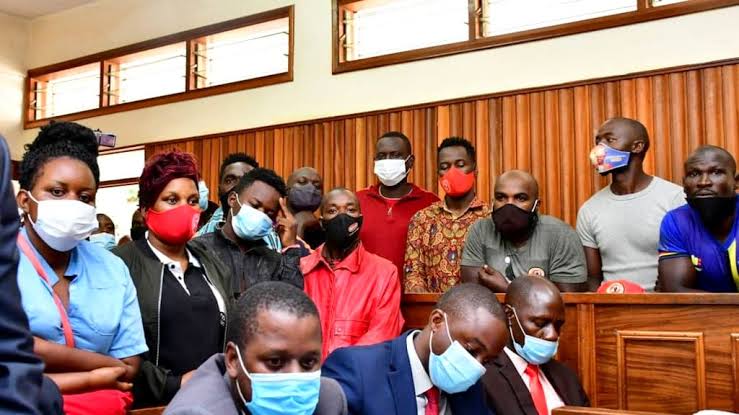 The Constitutional Court has ruled that the trial of the civilians in Military General Court Martial is illegal and ordered immediate transfer of their files to civil courts.

In a majority ruling, four out of five judges on Thursday ruled that the General Court Martial’s jurisdiction is only limited to trying service offences under the UPDF act.

Court ordered all civilians subjected to military court martial, that their files be transferred to civil courts under the direction of Director Public Prosecutions within 14 days from the day of ruling.

Judges said the judgement doesn’t exonerate anybody from criminal responsibility and said those affected will remain in lawful custody or bail as fresh charges may be brought by the DPP.

The judges also nullified several sections in the UPDF act including section 119 (1), Section 119 (h) and section 179 (1)(a) saying they are inconsistent with Article 28(1) of the Constitution of Uganda.

Constitutional also nullified the trial of the terrorism and illegal possession of firearms cases including that of National Unity Platform supporters who have been tried in the General Court Martial.

The ruling follows a petition by former Nakawa Division Member of Parliament Michael Kabaziguruka, to the Constitutional Court challenging the powers of the Court Martial.

This judgment doesn’t discharge or exonerate any person from any criminal responsibility and as such fresh charges may be brought by the DPP before civil courts,” it adds.

However, in their dissenting judgment, justices Christopher Madrama and Steven Musota ruled that for as long as civilians are subject to military law for example in the case of being found with military hardware, then the Court Martial has powers to try them.

The judgment said since enlistment into the army is voluntary, those who apply are well aware that they could be subjected to disciplinary action in the Army court, and therefore civilians who opt not to join the army should never be subjected to the same court and laws they didn’t sign up for.

Court further said, in the civilian courts, laws are designed to prevent undesirable behaviour, ensure public safety and resolve disputes peacefully while in the army emphasis is more on discipline with its judges under command to enforce the oath of allegiance of its serving officers.

In 2006, the Constitutional Court ruled that military prosecutions of civilians were unlawful despite the ruling, military courts have continued to prosecute civilians.

President Yoweri Museveni has defended using military courts for civilians on the ground that civilian courts were failing to secure convictions of those accused of violent crimes.