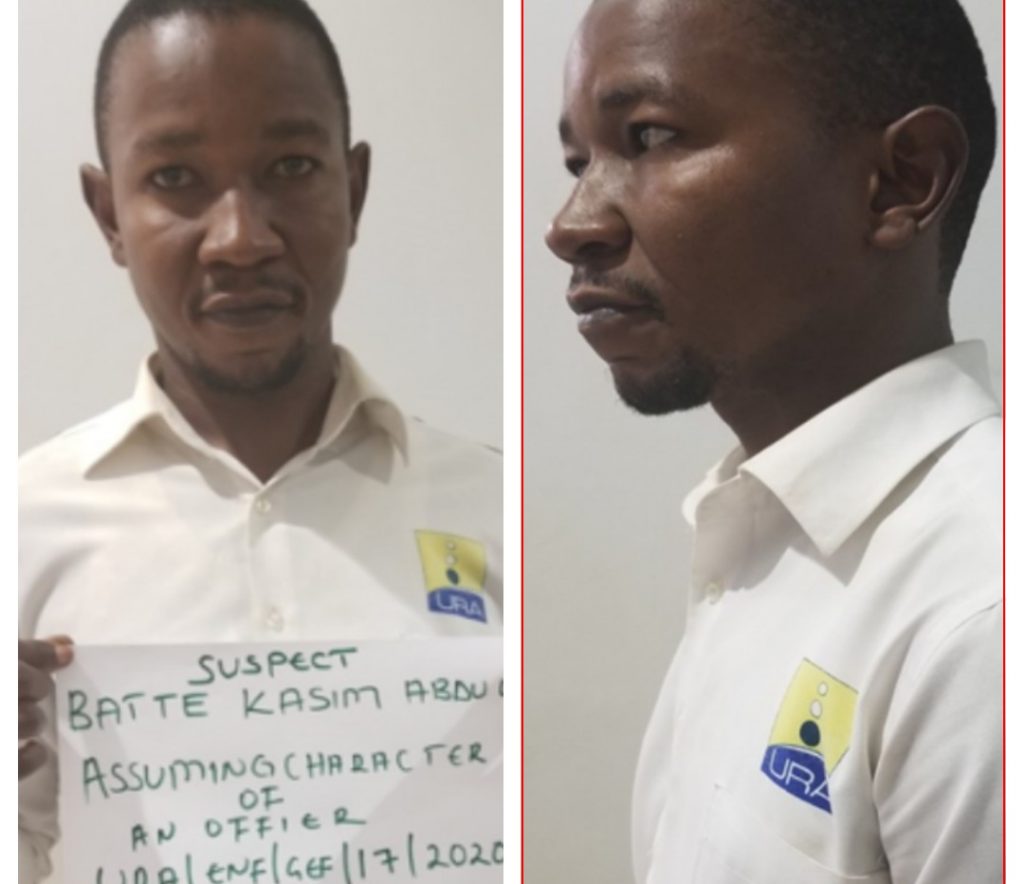 Operatives of the Uganda Revenue Authority on Monday arrested a conman who has been posturing as a URA employee and conning millions of shillings from unsuspecting Ugandans.

Kassim Abdul Batte who claims to be a clearing agent with Intra Cargo, was tracked down by URA operatives after the Authority received complaints from tax payers

It said that in December 2018, Batte  informed a client (complainant) that Uganda Revenue Authority was going to auction some vehicles.
According to Ian Rumanyika, the Assistant Commissioner Public and Corporate Affairs at URA, the suspect told the complainant about the availability of two vehicles, a Toyota Harrier and a Sahara Pick-up both in good condition.

Batte, dressed up in a white shirt emblazoned with a Uganda Revenue Authority logo and customs pips (an imitation of the URA customs officers’ uniform) informed the client that he works in the Commissioner Customs Office, Rumanyika  said.

To complete his con, Batte then first collected Shs1.2m from the complainant and after some time, he was given an additional Shs200,000 as a fee for registration number plates for each vehicle.

Rumanyika said that “Batte was Monday 27th January, 2020 arrested through the aid of the complainant and preliminary findings indicate that he works with a clique to defraud people with the false promise to help them secure vehicles and other goods being auctioned by URA. The group takes pictures of the items and sometimes bring the clients to the premises of URA.”

“We have established that Batte has owned the fake URA uniform since 2015. We also found him in possession of counterfeit URA payment slips with serial reference numbers; 436, 437, 438 and 439,” Rumanyika said.

He added that “Batte is set to be produced in court and charged accordingly. Other victims of this suspected fraudster are encouraged to come out and seek justice by registering their complaints.

The Public is urged to remain vigilant and to always visit URA Offices whenever they have any inquiries on any of our services. The public is further encouraged to swiftly report cases of fraudsters to the nearest URA office or Police station so that such unscrupulous persons are put away from the community. “