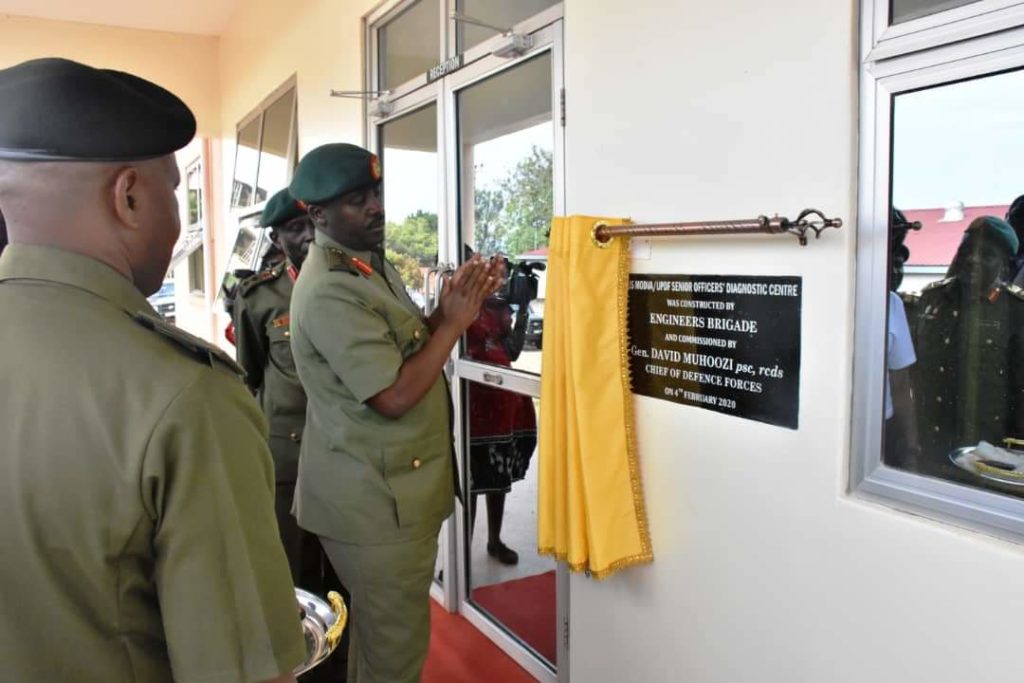 Gen. Muhoozi saluted the Engineering Brigade for the work well done and urged the officers to use the facility well so that it serves its purpose for long.

“UPDF priorities are now directed at soldiers’ welfare. I’m overjoyed because it comes at a time when we are celebrating 39 years as an Army”, he said.

The CDF thanked all those who have made this success possible, singling out the Permanent Secretary Ministry of Defence and Veteran affairs Mrs Rosette Byengoma, the JCOS Lt Gen Joseph Musanyufu, (Rtd) Maj Gen Sabiti Mutebile, former Chief Engineering Brigade among others, for starting this project, and the UPDF Engineering Brigade for the work well done.

He noted that over the years, UPDF accomplished a lot like decent training facilities, good health standards, and accommodation among others. The CDF said Infrastructure developments are a legacy.

The team, led by the CDF also inspected the Referral hospital which is now at 40-50% completion.

The CDF said it is part of a bigger plan to reduce congestion in government hospitals.

He added that the UPDF Units within central Uganda will all access medical care at this hospital with no need to travel to Bombo.

The Joint Chief of staff (JCOS) Lt. Gen. Joseph Musanyufu, said this unit being commissioned was an example of direct labor, adding that it will reduce expenditure on medical services especially in private hospitals.

He noted however that for the time being the hospital will only serve UPDF not everyone.

The Chief Medical Services Maj. Gen. Musinguzi said this hospital will be handling outpatients (OPD) and the in-patients services.

The facility has female and children’s ward, Men’s ward, a lab and theatre facility among others. “All the work was done UPDF Engineering Brigade “he added.

He thanked the UPDF strategic leadership and pledged to preserve and maintain the facility.

The construction is entirely funded by UPDF from its payments from the United Nations for the UPDF equipment in Somalia.