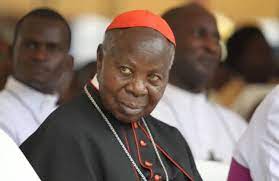 He is one of the cardinal electors who participated in the 2005 papal conclave that selected Pope Benedict XVI, He was succeeded in Kampala by late Archbishop Cyprian Kizito Lwanga.

Wamala is a Patron of the African Prisons Project, an international non-governmental organisation with a mission to bring dignity and hope to men, women and children in African prisons through health, education, justice and reintegration. On October 9, 2021 Wamala attended the burial in Uganda of Msgr. Henry Kyabukasa, his 92 year old younger brother. Kyabukasa was a former Prelate of the Roman Catholic Diocese of Masaka and died at Villa-Maria Hospital in Kalungu district on October 6, 2021.

At the installation of the new Archbishop of Kampala Paul Ssemogerere on January 25, 2022, the congregation was informed that Wamala was unable to physically attend the ceremony as he was weak.

Wamala last appeared to the public on November 21, 2021, at St Noa Mawaggali Cathedral in the Kiyinda-Mityana diocese, where he marked his 40th episcopal anniversary.