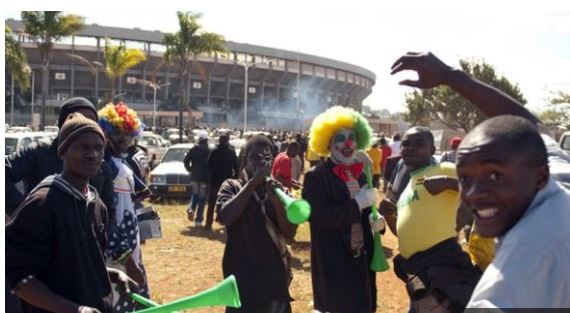 Zimbabwe has been barred from hosting any international matches until further notice after its main stadiums failed to meet required standards.

Zimbabwe’s Football Association (FA) (Zifa) says the Confederation of African Football (CAF) took the decision after inspecting stadiums in November and finding them below FIFA standards.

It means that Zimbabwe’s key 2021 Africa Cup of Nations qualifier against Algeria next month will have to be played in a neutral venue.

Zifa says it has already started the process of finding “an alternative venue in neighbouring countries” to host games.

This comes after CAF asked for improvement to three stadiums Barbourfields, Mandava and the National Sports Stadium, although none has yet been addressed.

“While Zifa is engaging CAF with a view to appeal this decision, we have asked stadium authorities to send us … timelines on work that needs to be done before Caf comes for another inspection,” said Zifa in a statement.

“To date, (none) of the three stadia authorities has requested us to invite CAFfor another inspection – a position which CAF has said led to the decision to bar all three stadiums from hosting international matches.”

However, this is embarrassing and will be costly for Zimbabwe, but it comes as a result of inaction by the authorities.

CAF inspected the stadia in Zimbabwe in November, and Barbourfields in Bulawayo was the only venue that was approved, but on temporary basis.

The Zimbabwe Football Association does not control the stadia, which belong to councils and, in the case of the National Sports Stadium, to government.

The renovations needed include fixing the pitches, dressing rooms and floodlights, but the economic crisis in the country made it unlikely that action would be taken.

But now, hosting home matches in South Africa or elsewhere will have huge financial implications.