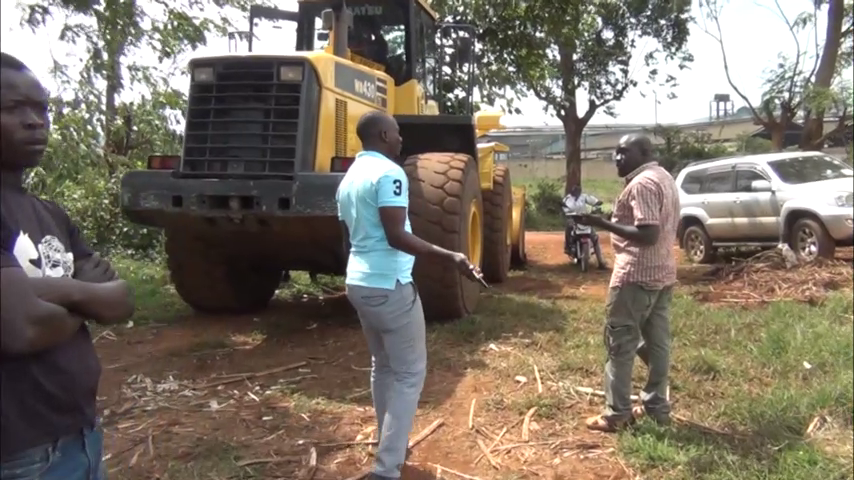 Njeru municipality council members have expressed concern over the growing number of public land given away in the municipality without notifying them. They say such cases have resulted in conflicts and insecurity in the community.

This comes after people started dividing the 59 acres of public land which the government plans to construct a hospital, a market and a school for the people of Njeru municipality.

At the contested land on plot M31, M57,M58 and 5C, Njeru leaders along sIde their woman member of parliament Diana Mutasingwa, found tractors grading the land and burning of the sugarcane farm a thing that sparked a verbal exchange between the councilors in the process stopping the tractors that were grading the land.

The leaders allege that some district officials including RDC Jane Francis Kagaayi and Buikwe land board are conniving with investors to grab the land yet there is a court case on who is a rightful owner of the land and wondering how investors attained the land without their knowledge.

“We are tired of the Buikwe district RDC let the president change this woman. We are tired of her, she is involved in various dubious land transactions in Buikwe ” Said councillors.

The Njeru municipality speaker Robert Mulwaana, reported that on Monday when they stopped the grading of the land by the said developers, the Buikwe RDC ordered police to arrest them saying that they were sabotaging development.

The councilors are saying that currently Njeru Municipality has been planning to construct facilities such as a market, a hospital and a technical school on this land The leaders insist that they not look on while the land is being grabbed.

The Buikwe district woman member of parliament and minister of state in the office of the vice president, Diana Mutasingwa stopped the construction and road grading activities on this land until the matters are resolved.

“I want those claiming ownership on this land to show evidence, Iam stopping all the activities on this land immediately until the matter is resolved” Mutasingwa noted.

Our efforts to talk to the Buikwe district RDC Jane Francis Kagaayi and the land board secretary Hadiijja Sebyaala to ascertain how the investors got the land were futile as they were not picking the phone.