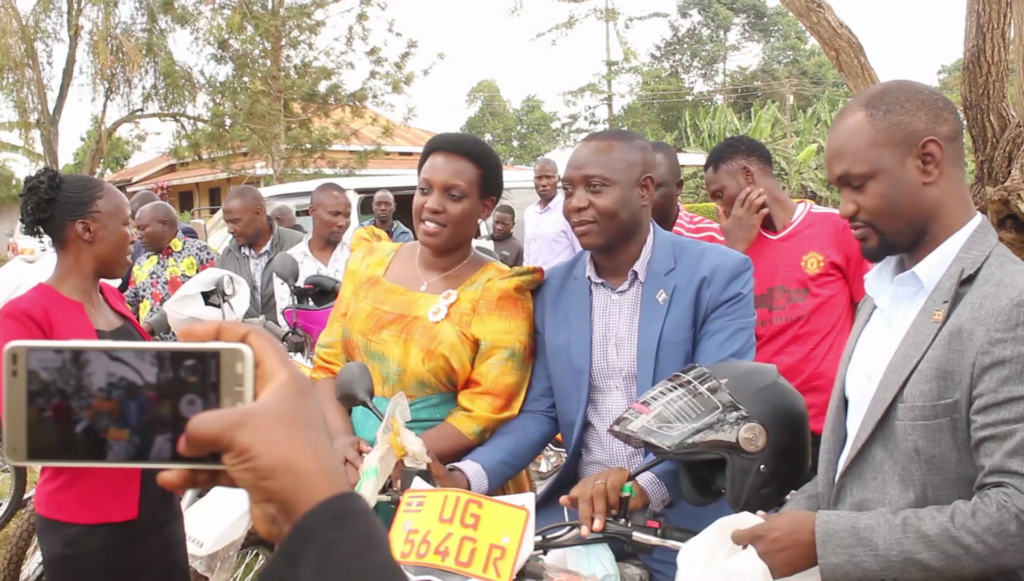 The 13 Buikwe sub county chairpersons have received motor bikes worth 300 million shillings from the ministry of local government to ease mobility in their sub counties.
The motorcycles were handed over by the Buikwe woman member of parliament also minister of state in the office of the vice president Diana Mutasingwa, at the Buikwe district headquarters.
While receiving the bikes the chairpersons asked government consider increasing their salaries due to their working conditions and the hiking prices of goods and commodities especially fuel in the country.
The Lugazi Municipality Member of Parliament Stephen Serubula urged the leaders to handle these bikes responsibly to avoid driving them under the influence of alcohol and avoid taking them to every mechanic and they have to go through the process.
They also told us how happy they are to save them from the dust, However they noted that they are likely to park these motor bikes because of their very low allowances which cannot enable them to afford fuel and maintenance.
“Am glad to receive this motorcycle rom government, However the challenge is on fuel and maintenance sub counties have no funds and we might end up misusing taxpayers money because we want to sustain the motorcycle” Said Khemis Lutajani the Kawolo Division chairperson.
Buikwe District Chairman Kanaabi Jimmy on behalf of the councilors said the issue of giving motorcycles to the leaders will not divert them from agitating for their salary increment, and they will continue to reminding the government or else they will seek possible ways like putting down the tools.
State Minister in the Office of the Vice President Diana Mutasingwa said it is true that there is a need for the leaders to have their salary increased; meanwhile they should accept the little they receive as plans more for them in future.
She appealed to the chairpersons to be use the Bikes especially in monitoring government projects like roads, schools and health facilities and also spreading the gospel of parish development model in the district.