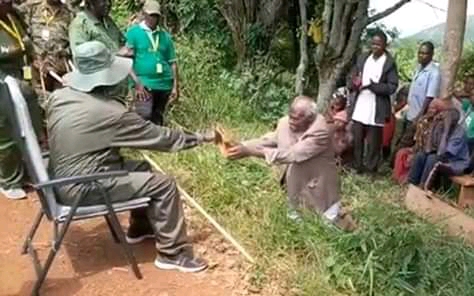 President Yoweri Museveni on Thursday concluded the 195KM walk which he started in Galamba, Wakiso district last week and ended at Camp 6 Burembo in Kibaale district.

However, our Moles reveal that Museveni’s great trek was mainly characterized by brown envelopes, which he kept dishing out to several veterans and other people who contributed support to the NRA  activities like donating food to the fighters,  giving them financial support, shelter, medication and to relatives of those who lost loved ones in the struggle.

It should however be noted that Museveni has been dishing out brown envelopes the the over 30 years  the NRM has been  in power and at some point he even dished out sacks to voters.

Although very many people assert that they contributed to the NRA struggle in which they lost property and others perished, here are the few lucky ones that managed to get brown envelopes from Museveni.