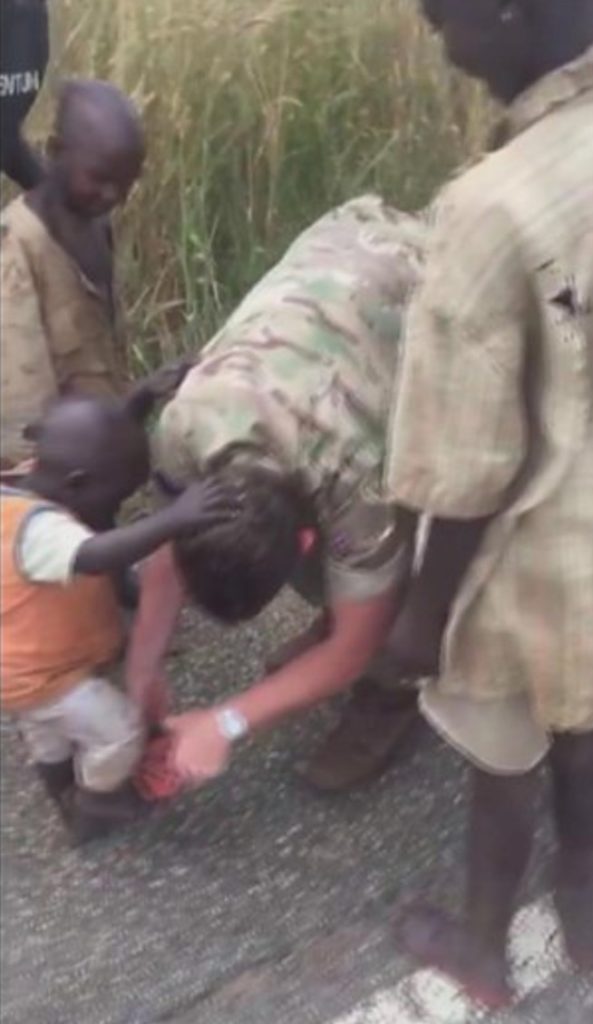 A British soldier has launched a charitable campaign of donating shoes to all Ugandans who cannot afford at least one pair.

Staff Sergeant Ian Payne says that when he moved his family from the UK to Uganda for work, little did he know that he would also embark on a journey of generosity.

For the past eight months Ian has been on secondment at the High Commission of Uganda in the capital Kampala.

He started a running group at a local boxing club where he saw the poor condition of the runners’ shoes.

“I looked down and saw that the boys’ shoes were in a bad way,” says Ian, who is originally from London, UK.

“I felt fortunate for myself and my family but very sad inside as I could see their poverty and I did not like it.

“Yet they were smiling and just happy getting on with life, and this humbled me and I wanted to help.”
Ian thought about the number of shoes he no longer wore and quickly decided to donate his own shoes.

He enlisted the help of friends and family to give away their spare shoes too.
“When I received them, I kitted out the guys but had loads of shoes left over,” says Ian, who is part of the Adjutant General’s Corps in the United Kingdom.

When he drives out of Kampala for business, Ian says he has seen many people walking on roads with no shoes.

“Out west it’s really bad,” he said. “I keep shoes at the back of my vehicle so that if I see people without shoes, I can pull over and give them a pair.”

He visited a local orphanage where he gave away dozens of shoes to children.
“The difference was evident straightaway. Seeing their faces light up, they are so happy to receive something that seems so simple to us.
“Many dropped to their knees saying ‘God bless you’, and praying.”

When Ian posted an appeal for shoe sharing on social media, the response was huge.
Some people have contacted him saying they have created shoe collection stations in their local areas. Ian’s colleagues on operational tours have also sent him donations.

“Many people have sent shoes that have hardly been worn and are in good condition. Others may be old but they are better than no shoes.”

So far, Ian has received the majority of donations from the UK, but he has also had interest from other parts of the world – from Cyprus to the US.

“It has snowballed on social media – the response has been crazy,” says Ian. “It’s like a full-time job replying to messages.
“It started with trainers and it has expanded to any kind of shoes – although I don’t accept high heels!”

He says people also wanted to send him clothes but it was just him handling all the donations.
“I’m a one-man band but I have recently roped in my daughters to help.”

Ian is targeting rural areas where he has identified a need for shoes, especially for children.

“I really can’t stress enough how grateful they are to receive a pair of shoes,” he says.
“Yet I still feel saddened as I have barely scratched the surface and so much more can be done,” said Ian, the Big Hearted Soldier.