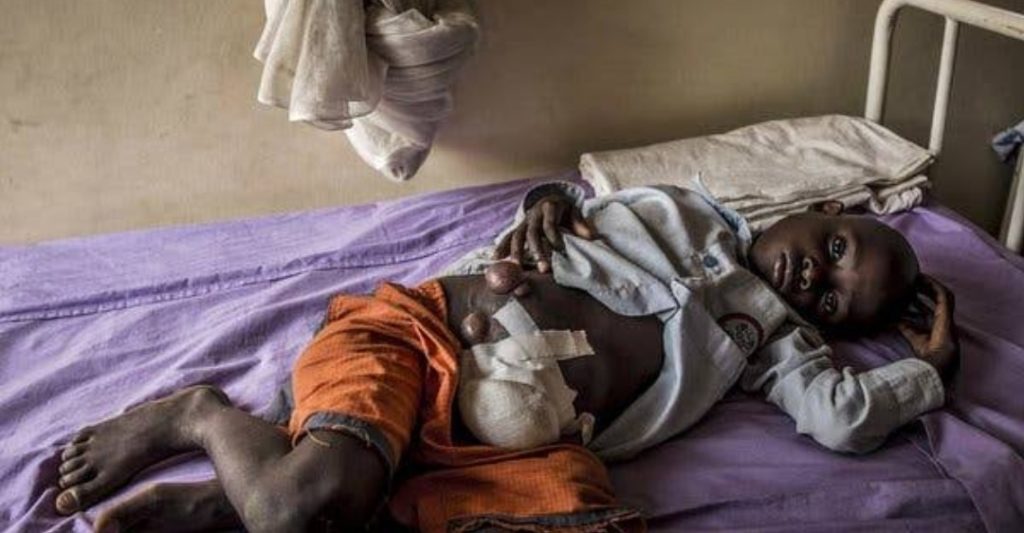 Researchers tested a drug on 150 cancer patients and said it was well tolerated from deadly side effects.

While existing drugs attack healthy cells, the new one can be better targeted. It could treat chronic myeloid leukaemia, which mostly affects older people.

The experimental leukaemia drug can fight the blood cancer without causing toxic side effects, researchers say, after testing it on human patients for the first time.

Drugs for chronic myeloid leukaemia, called Kinase inhibitors, come with the risk of vomiting, diarrhoea and muscle pain, and  can also stop working after time.

But a trial of Asciminib – a new drug which works in the same way – found it is effective and ‘well-tolerated’ by patients.

The researchers said it was a ‘breakthrough’ in treating chronic myeloid leukaemia (CML), which most commonly affects people in their 60s, and offers an extra option for patients who have exhausted other drugs.

Scientists also claim it could spare thousands of patients the side effects because it does not inadvertently kill healthy cells at the same time.

The drug could be used to treat chronic myeloid leukaemia, scientists said, which causes the body to create too many white blood cells which clog up the bone marrow and mean there is less room for other types of important cells.

Results of the 150-patient trial – the first to be done on humans – found asciminib was not toxic and appeared to work effectively inside the patients.

Asciminib slows down the blood cancer by shutting down specific cancer-causing enzymes called Kinases – it is part of a class of drugs known as Kinase inhibitors.

Doctors around the world praised the creation of the first tyrosine kinase inhibitor (TKI) called imatinib in the 1990s.

Study co-author Professor Tim Hughes, of the South Australian Health and Medical Research Institute, said it changed the lives of patients with the disease.

He said: ‘Imatinib changed CML from a death sentence to a disease that in many patients could be managed until they lived to a ripe old age.

As many as 95 per cent of TKI patients can suffer side effects from their cancer drugs, although experiences vary from patient to patient.

Side effects can be severe and include life-threatening conditions such as heart failure and liver pain.

They can also stop working if people have been taking them for a long time, and there is a limited number of options for patients to try.
Professor Hughes claimed if the drug is successfully developed and put into use it would be the biggest breakthrough in leukaemia treatment since the 90s.

Alasdair Rankin, the director of research at leukaemia charity Bloodwise, told media it would be ‘amazing’ and ‘lifesaving’ for some patients to have an extra option.

‘Some treatments start to fail and patients have to move on,’ he said.
‘Many people are able to move on, but it’s really worrying that some people run out of options.

What is Chronic myeloid leukaemia?

Chronic myeloid leukaemia (CML) is a slow-growing cancer of the blood which mostly affects older people.

There are three stages of CML and most patients are diagnosed in the early or chronic phase. In this phase the body makes too many mature white blood cells – in later stages it makes too many immature cells.

The excessive numbers of blood cells can overcrowd the bone marrow, meaning there isn’t enough room for other important blood cells to be made. This can cause many of the signs and symptoms of CML.

Around 750 people are diagnosed with CML each year along with approximately.
The disease is more common in older people and the average age at diagnosis is about 60. Patients can get CML at any age, although though it’s very rare in children under 15.

About 90 per cent of people with CML are diagnosed during a slow phase of the disease and most will be able to stay in this phase for life with the help of treatment to stop it getting worse.

With treatment, it’s usually possible to manage CML and keep it under control but it can be fatal.

‘And some of the options available that far down the line might have serious cardiac side effects and you might not want to use it.

‘A treatment like this one sounds like it’s been effective. It’s a first-in-man trial so they’re trying to see if it’s toxic or not. The study’s in a high profile journal because it’s had good results.

‘This could be lifesaving for people who have failed treatment on existing TKIs – this is a new option for them, although we would say more research needs to be done.’

Chronic myeloid leukaemia is a slow-growing cancer of the white blood cells which takes years to progress – it is most common among over-60s.

People with CML tend to live with the disease under control, rather than having it cured completely.

Survival rates are good – around three quarters of patients on treatment now live for five years or more after their diagnosis.

Professor Hughes and team tested asciminib on 150 patients, which proved the drug worked and was ‘durable’.

The drug could not be tested on its own because the patients were having ongoing cancer treatment.

The study was carried out by giving patients doses of between 10mg and 200mg of asciminib once or twice a day and following them up for around 14 months.

It found that the drug was active inside the patients’ bodies, even while they were having other cancer treatment.

Five patients also got pancreatitis – a swollen pancreas. Despite the side effects, the researchers said the test was a success.

Professor Hughes added: ‘This trial showed asciminib is highly effective, even in patients who’d failed to respond to several other TKIs.
‘Equally as important, it’s well tolerated by patients and appears to have significantly less long-term ill-effects compared to current treatments.’

Current CML medications, taken as pills, work by blocking proteins which can cause cancerous cells to multiply.

By continuously blocking them over a long period of time, the drugs are intended to keep the cancer under control and stop it spreading.
But they can also block proteins which carry out normal functions. This may damage or destroy cells which are vital for the body to keep functioning normally.

Tests confirmed asciminib – supplied by Novartis Pharmaceuticals – only attacked the leukaemia proteins and not the healthy ones.