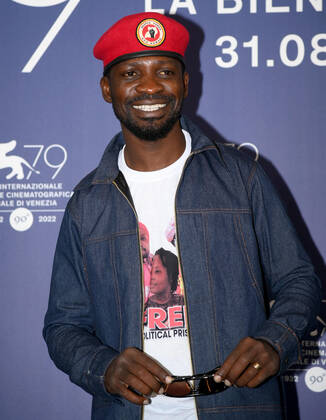 Robert Kyagulanyi Ssentamu.
The leader of the National Unity Platform (NUP) party Robert Kyagulanyi Ssentamu also know as Bobi Wine has resorted to the film as one means of exposing the injustices of President Yoweri Museveni.
Kyagulanyi who is currently taking part in the 79th World Film Festival in Venice, Italy for the premiere of his documentary “Bobi Wine: Ghetto President”, believes through this means, Museveni’s actions can be exposed to the international community something he said can help to push the struggle forward.
The film draws a sharp contrast between Museveni, who has ruled Uganda since coming to power in 1986 and the singer cum politician.
“For the last 5 years, our struggle has been captured on camera and a documentary film was made to show to the world the true picture of what is happening in Uganda. I am humbled that this film was selected to be among the top 20 films in the world to grace this festival,” he said.
Kyagulanyi hopes the film goes far to expose the true picture of Uganda’s situation, something he claimed the regime has been paying billions of taxpayers’ money to hide from the world.
He believes in the journey to ensure that Ugandans are liberated from the hands of the regime, there is need for a sacrifice from all the change seeking forces.
The documentary highlights Kyagulanyi’s story of how he rose from the informal settlement of Kamwokya, a suburb in Kampala and became a star with his pursuit of justice and democracy in Uganda, to an international audience.
“I want the people in the international community to know that somewhere in the world, somewhere in Africa, in a country called Uganda, people are being massacred for what they think,” he said in one of the interviews.
Kyagulanyi has been telling the international community which provides aid to Uganda that their money is being used to violate human rights and undermine democracy in Uganda.
The documentary also traces the start of Kyagulanyi’s grassroots political campaign in 2017 up to 2021, when he unsuccessfully ran against Museveni in the presidential elections.
For the two decades before he officially entered politics, Kyagulanyi was using his music to address social justice and push for reform in the country.