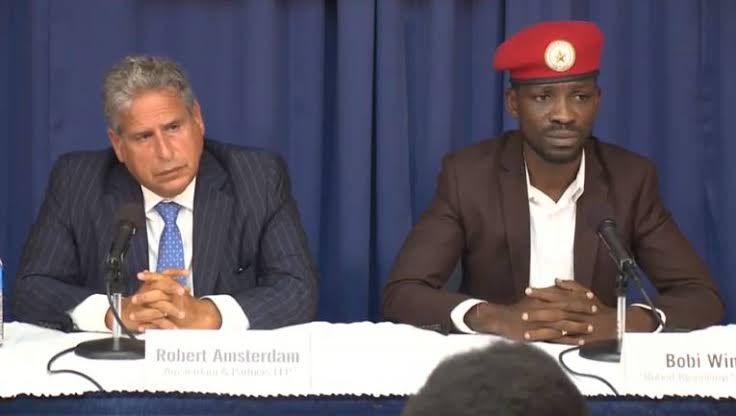 Our sources reveal that Amsterdam is flying into the country to task government to explain why there is increased human rights abuse, especially of People Power supporters.

Insiders within People Power reveal that Amsterdam is coming from Los Angeles, USA, to demand answers from government as to why Bobi Wine’s  concerts were blocked by police, just like he was blocked from conducting his presidential consultations.

According to the former British Ambassador to Russia, Andrew Wood, “The word that best describes Bob is courage, both moral and actual. He raises questions that are not always welcome, and that is often the proper business of a lawyer.”

He  is an international lawyer with 35 years experience working on high-profile cases in emerging markets. His law firm Amsterdam & Partners LLP, with offices in London and Washington DC, is frequently sought after for its unique practice areas which explore synergies between public international law, international criminal law, and political advocacy.

Amsterdam has been retained by multinational mining and energy corporations on issues pertaining to resource nationalism and expropriation, while also representing sovereigns in disputes with foreign investors.

His unique blend of political advocacy and international law has led to his retention by several world leaders, such as the former Prime Minister of Thailand Thaksin Shinawatra, former President of Zambia Rupiah Banda, Governor Godswill Akpabio of Akwa Ibom State in Nigeria, among other high profile figures.

With significant experience on the ground in emerging economies across Africa, Asia, Eurasia, and Latin America, Amsterdam has successively settled disputes for major corporations such as PWC and the Four Seasons Hotel & Resorts Group, while also advising companies on opening new markets and managing political risk.

The law firm is well known for its pro bono practice in human rights, including the defense of the award-winning democracy activist Dr. Chee Soon Juan of Singapore, Ilya Ponomarev, an exiled Russian State Duma Deputy, and the journalist Stephan Templ, who recently became the first Jewish political prisoner of Austria.

The firm has also represented Georges Tadonki, a United Nations employee who survived a campaign of intimidation by officials in Zimbabwe – a case which resulted in Amsterdam & Partners LLP being awarded the 2013 Global Pro Bono Dispute of the Year Award from American Lawyer.

Amsterdam has also represented high profile political prisoners, such as the former head of the Yukos oil company in Russia, Mikhail Khodorkovsky, who was successfully released into freedom.

As a prolific columnist and blogger, Amsterdam’s writings have been published in the International Herald Tribune, the Financial Times, the Wall Street Journal, the Washington Post, and the Fordham International Law Journal, among other publications.

Amsterdam has made several television appearances on networks such as CNN, CNBC, Bloomberg, BBC, and Fox News. A profile feature of Amsterdam was published in the magazine American Lawyer in February 2012.

Amsterdam is a member of the Canadian and International Bar Associations, and is licensed as a solicitor in the United Kingdom. He earned his BA from Carleton University in Ottawa, and studied law at Queen’s University in Ontario (LLB).