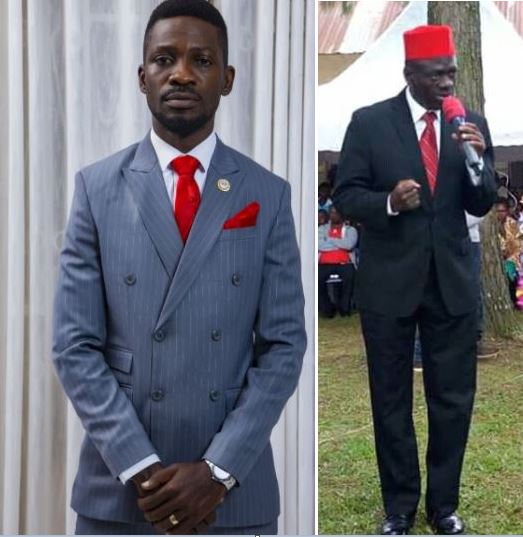 Presidential aspirant Robert Kyagulanyi Ssentamu aka Bobi Wine, who is vying for presidency in the 2021 general election on the National Unity Platform (NUP) ticket, has hailed Forum for Democratic Change (FDC) stalwart Rt.d Col. Dr. Kizza Besigye for leading the struggle for change in Uganda.

Bobi Wine revealed that and more in his presidential manifesto which he launched on Facebook and other social media platforms, after his efforts to launch at the NUP offices in Kamwokya, Kampala, were thwarted by police on Tuesday.

I bring you revolutionary greetings wherever you are, and thank you for the immense support you have offered us for the past three years amidst so many challenges!

I take this opportunity to announce that what we are witnessing right now is the launch of a very critical phase in our struggle to liberate ourselves from a dictatorship which has crippled our country for more than three decades!

A dictatorship which has strangled our economy with massive corruption, patronage, high cost of doing business, high cost of public administration, a sick healthcare system, a broken education system, etc etc. For a very long time we have lamented about a government which works only for a few and excludes the majority. Today we close the book of lamentations and open the book of Acts; action that will put an end to the suffering, oppression and indignity of Ugandans.

Countrymen and women, I come before you not as the most experienced person, but as the most committed person, ready to lead the mission of turning a new page in the history of our country.

For the last 58 years, our nation has suffered so many problems, key amongst which have been dictatorships, each trying so hard to outdo its predecessors in violence, looting and plunder. We have not witnessed a peaceful transfer of power from one government to another.

Unfortunately, fifteen years ago, Gen. Museveni failed to resist the temptation that befalls all dictators, and  removed term limits from our Constitution. Through greed, he denied our nation of an opportunity of experiencing a peaceful transition from one leader to another, from one generation to another. And three years ago, this greed caused him to act in the most shameful manner, and the last safeguard in form of age limit was removed. Museveni, like Idi Amin declared himself president for life for our country. Little did he anticipate that this generation would stop at nothing to put an end to his regime! And so today I have news for Gen. Museveni- since you have failed to control your greed and lust for power, our generation is determined to save you from yourself and stop your life presidency project.

The liberation and social economic transformation of our country cannot be achieved unless if we first remove the obstacle, and that is Gen. Museveni who has undermined all state institutions, and instead institutionalized corruption, sectarianism and all manner of human rights violations!

Fellow Ugandans, I am offering myself as a candidate for the highest office in our land as a representative of all the oppressed Ugandans.

My background is well known to all of you follow citizens. Born to hustling parents like most of you, raised in the ghetto and fortunate to rise to the top through talent and hardwork. It is this background that has enabled me to understand the struggles of common Ugandans. Thirty five years feeding off the taxpayer and living in absolute abundancy, Gen. Museveni and his cronies are so detached from the common person. No wonder, they mock our people who they have impoverished, battered and suppressed.

I present myself not as a boss, but as a servant of you, the people!

While our detailed plan of action towards a new Uganda will be presented to you in our manifesto, allow me to state that we will run a people centered government which will focus on these areas.

1. I intend to increase the pay of the security forces.

The pay of our soldiers, police and prison officers is miserable and must be improved. If I become president, I will have the privilege to know what the classified budget really does. Such a huge amount of money will be used to improve the pay of our security forces so that they can live better lives. When I am president, the lowest paid soldier or police officer will be earn 1 million shillings. I will improve their housing and health care. Low ranking and middle-ranking officers must be as entitled to free, quality healthcare as the high ranking officers. Our government will find opportunities for the spouses of soldiers and police officers to ensure that they are each contributing to the livelihood of their families. I also intend to streamline the promotion criteria in the armed forces and this will be based on merit, not technical know who. Never again will soldiers be forced to become police officers like we see today, because they had the option of joining the police but decided to join the army. In our plan, the better option is not to recruit the army into the police but to help the police become better. The children of soldiers and police officers will be entitled to free education up to university level. There is no greater sacrifice than serving one’s country in uniform and it will be our deliberate plan to ensure that our men and women in uniform live in dignity. We firmly believe that if we do so, our armed forces will in turn respect the rights of all citizens. In the New Uganda, there will be mutual respect between those in uniform and the ordinary citizens of Uganda. If I become president, we shall introduce contract arrangements for security forces. In other countries, one can serve in the military and after an agreed time, be entitled to early retirement with benefits. This is something we shall explore, and we believe it will encourage more professionals to join the armed forces.

2. In the New Uganda, there will be access to affordable quality health care for all Ugandans. This will be a priority in terms of budgetary allocations, effective supervision and improved pay for our health workers. We shall implement the Abuja Declaration and ensure that we spend at least 15% of our annual budget on the health sector. We believe that a healthy population is a productive population.

In our government, the lowest paid worker should be paid atleast 1 million shillings. In order to curb the number of mothers who die or get complications while giving birth, we shall establish a maternity ward at every sub-county in Uganda, and we shall do it.

Our government will radically transform Uganda’s education. We shall pursue a n ambitious, yet achievable policy of ensuring that all schools in Uganda are rehabilitated, adequately equipped and sufficiently staffed. Where there are no schools, we shall build them. The money we use to purchase teargas trucks, and that which Gen. Museveni spends on patronage is sufficient to build so many schools. We shall ensure that our education is not only theoretical but skills based. The focus will not only be on academics, but on arts, athletics and agriculture as well.

4. Employment and Job creation. Our country is grappling with high levels of unemployment and our government will focus on creating a conducive business environment with clear focus on addressing power tarifs, lending rates and elimination of extortion by enforcement agencies. These efforts will be supplemented by training in vocational schools. We will have a skills training centre at every sub-county in Uganda. We shall extend support to small scale industries in urban centers as well as finding markets for our products both at regional and global level. When we fix the loopholes and focus our energies, we shall be able to create more than five million jobs in our term of office.

5. Agriculture. This remains the backbone of our economy even if it has not been given the due attention. Our government will zone the country and aggressively promote a cash crop and food crop for each zone. We shall revive the cooperative movement, so as to secure markets, negotiate prices and provide post-harvest technology.

We shall ensure access to proper inputs and promote good agricultural practices and value addition. We shall revamp coffee production and in this regard, our government will ensure that by 2025, Uganda exports 50 million bags of coffee.

Our government will focus on promotion of Science and technology as a catalyst for economic growth and development. This will be done through allocation of funds to schools that are specifically for this purpose, establishment of innovation hubs in every sub region of Uganda among other things. Our school going children should receive world class ICT training that is skills based to enable them to compete on the global labor markets.

Fellow Ugandans, there are many other things we plan to do for our nation, some of which are entailed in our manifesto. Gen. Museveni has destroyed so many dreams of Ugandans. But today we say to you, dare to dream again. We can and shall transform our nation. A nation that has been reduced into a laughing stock shall once again rise to the top and be the true pearl of Africa. Nothing can defeat a people united by conviction. Nothing can stop an idea whose time has come. Our story as people power and NUP, and also my story as an individual is a story of commitment and resilience and a good example that challenges only strengthen the prepared.

Let’s come together under the umbrella of a new Uganda, then match forward to that new Uganda.

We know that Museveni prides in his record of rigging elections and that the electoral commission helps him in achieving that. Today, let me send a message to him and Mr. Byabakama, it is in your best interest not to interfere with the will of the people of Uganda. Should you be tempted to mess with Ugandans this time, the cost will be high.

To all Ugandans out there, we rally you to treat this not as a usual election but as a revolutionary election. The stakes are so high. The transition stares us in the face. We have entered the ring and we shall not come out. This is it. It is a battle between the past and the future. The old and the new. Power is now in the hands of the people of Uganda and they can choose who to trust it with. For all those who have been waiting for the time, it is now. Tusimbudde paka Entebe mu ntebe. This is a mission to Freedom.  We are removing a dictator.

Finally, let me pay tribute to all strugglists who came before us. We are alive to the fact that we stand on the shoulders of those who came before us in resisting this dictatorship. Dr. Paul K. Ssemwogerere, Dr. Kizza Besigye, Dr. Miria Matembe and all the others who have been part of this struggle, I salute you. I also pay homage to those who have paid the ultimate price in the pursuit of this struggle. Let me assure you that your sacrifice was never in vain. We shall overcome.