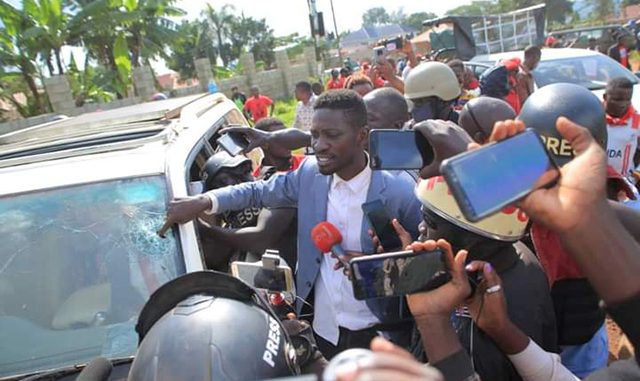 Earlier in the day, there was a heavy police and military deployment with several roadblocks leading to the sub county headquarters.

Heavy deployment was also noticed along the source of the Nile Bridge. Police was forced to fire tear gas and live bullets after Kyagulanyi, aka Bobi Wine and his supporters refused to access Jinja City through the old bridge..

. The crowds however kept on increasing and security personnel fired live ammunition towards Kyagulanyi’s vehicle deflating the tyres.

Kyagulanyi resolved to cancel his final campaign rally in Jinja on grounds that he lacked the transport means to access his supporters.

Kyagulanyi told journalists that since he started his campaigns, security personnel have continued to harass him and the Electoral Commission [EC] has remained silent on the matter.

I have been forced to think that the Electoral Commission has lost track of this race and left us to be tormented and disrespected by security organs which are meant to be protecting us,” he says.

Kyagulanyi further says that he will meet the Electoral Commission [EC] chairman Simon Byabakama over the matte Earlier in the day, several people including a police guard attached to Kyagulanyi was injured as the police and army fired teargas and rubber bullets to disperse NUP supporters in Kayunga.