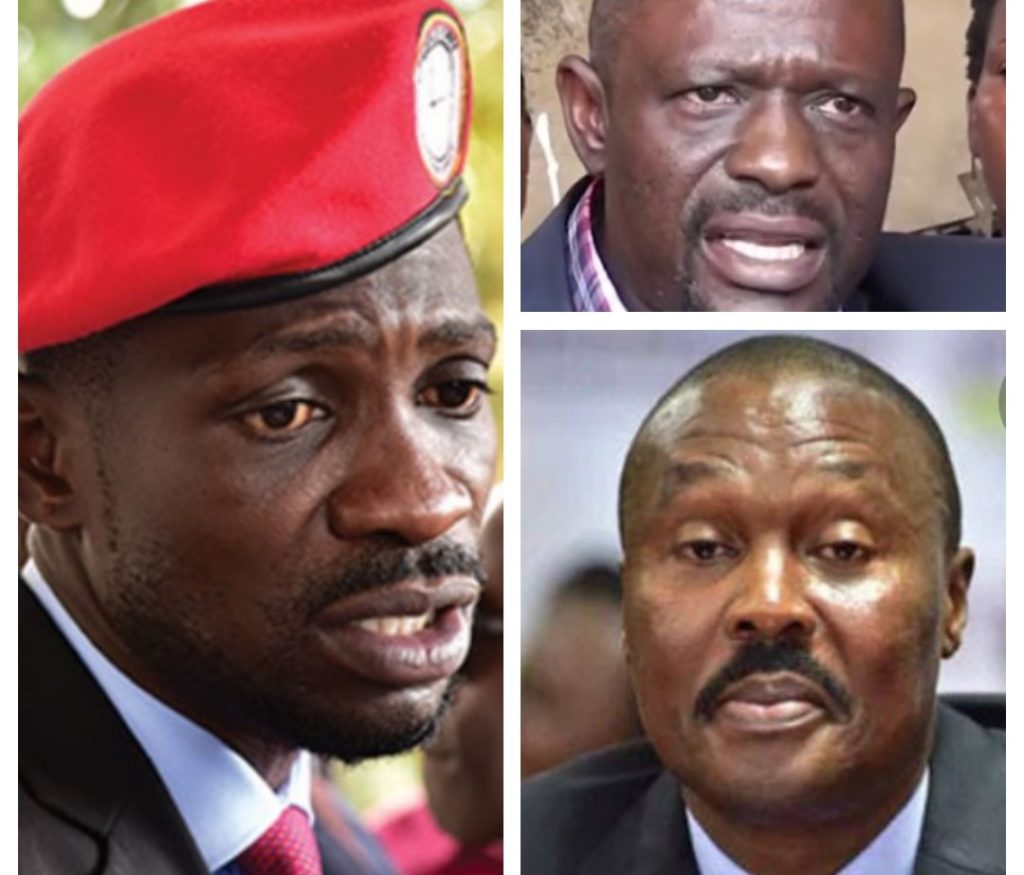 Hon. Robert Kyagulanyi aka Bobi Wine’s People Power movement has been infiltrated by Moles who are allegedly working to further the mandate of the ruling National Resistance Movement (NRM) and other political parties, to the detriment of People Power.

This revelation was made by Kaweesa Kaweesa, a People Power coordinator in Mukono district, who named some of the alleged Moles as Bobi Wine’s brother Chairman Nyanzi, Rtd. Gen. Mugisha Muntu of Alliance for National Transformation (ANT) party, Latiff Sebagala, the Kawempe North legislator, Councillor Mohammed Segirinya, Moses Bigirwa, a one Majjamebere,  among others.

Kaweesa named these so-called Moles is scathing document he posted on his Facebook wall which reads thus;

Last week, I wrote this mesmerising revelation of how NRM has infiltrated power to a tune of 75%. I couldn’t publish it then because Bobi was teargassed and arrested by police on Monday yet this article was written in good faith so I withheld it.

A week later Bobi’s Northern Uganda consultation trek managed to expose not only the fact that all names mentioned are true but further exposed more NRM implants inside PP.

I hereby reproduce it unedited

Kyagulanyi Ssentamu still has most people’s favour to to oust the regime and we have very tight hopes in him.  I believe he is true change activist Unfortunately he is surrounded by opportunists and greedy business minded lots who see him as a source of income not change.

People power has so cacooned itself inside an “attack and abuse” blockade that  has so shielded it from any wise guidance and advice making it rot from inside.

Moving unguided and riding on youthful ego,  has turned  the group into a sham den of false hope to true change loving Ugandans who might turn their hatred for dictator M7 to it if what is brewing inside explodes.

In its short lifespan so far, PP has graduated into the most NRM mole infested group composed of  more “ABANONYI” (self seekers) at her forefront than change agents, a fact always covered up by members who spend more time attacking other change agents and praising Bobi

When the regime realised BOBI WINE was a force to recon with among the youth M7 immedietely took advantage of PPs lack of any recruitment strategy to recruit it’s NRM youths into its ranks. M7 is calculating a simple strategy, dress his agents into people power  colours and win NRM seats indirectly especially in Buganda

The current trek of musicians to M7 is basically for two reasons, 1- When they see the money eating cycle in PP they chose to go to the source by themselves and
2. M7 is in a move to kill off all Baganda musicians through rubbing them with their audience by linking them to him.

The worst revelation came Saturday 4th at the launch of M7s walk.

One Majjembere a “renown” People power activist was seen shamelessly walking side by side with dictator m7!

Besides this intriguing site, instead of people power activists addressing this issue  they ignored it and settled on attacking Hon Nambooze for a NBS forged statement designed to divide opposition.

Majjambere going back to M7 to us who know Ugandas politics of ethnicity is no big deal, the issue I want to raise now is that of the inner team he has left behind in people power unravelled yet it’s really big.

Majjembere was introduced into PP hierarchy by Mr ssempebwa Mayor kasangati town council! Within people power ranks he works closely with one Apollo aka “sweetie apple” who is  the aide to Mr Ssempembwa the mayor of kasangati!!

Apollo aka “sweetie apple” and Majambere operate a WhatsApp group called “TEAM DISSENTERS” which is basically composed of people within PP ranks who have been  recruited into NRM from within.  Majambere himself is the sole administrator of that group.

Ssentamu  recruited one Machete and Ssegujja into PP and directly assigned them this group, which also operates it’s whatsup group called *Bali-bali*

Unlike Majjembere’s group recruiting for NRM this is tasked with recruiting PP supporters into DP/NRM to support Norbert Mao’s presidential bid!!.

The regime interest in this is dividing youth votes to different candidates. The biggest irony is that it’s headed by  Chairman Nyanzi. In PP  chairman Nyanzi discourages PP from building structures or even further mobilise people to register as voters especially in villages. He argues people especially known activists to register in K’la where he ll stand as MP clearly ignoring the wide BOBI presidential bid.

In that format many people have scrambled their way into PP hierarchy individually while Hon Kyagulanyi’s presidential bid stays static save for theoratical social media praises and using his name to attack other opposition forces.

This congestion of confusion was reflected in Hoima by-elections where facts were just sat on but it is known that NRM bought PP cordinators, and DR forms from senior PP poll handlers to aid it’s vote theft.

From Hoima sale out members culprit PP members like  Soudah Madada, Waiswa Mufumbiro  and Ssegirinya Muhamed were chased out of the PP though it stayed salient.

Late last year news filtered through of Moses Bigirwa’s betrayal of the cause and physical evidence was  availed but ignored and silenced simply because exposing Bigirwa would crumble the whole PP setup because he knew all inner banonyi activities and individuals at Magere. Though chased from Magere this wascalso swept under the carpet just to keep PP together though rotting with moles inside

PP is stuck with such many people in its ranks it can’t dispose them off yet they can’t fully work for it simply bse they know the rot within and can tare apart the whole setup when exposed .

The biggest danger inside PP is Mugisha Muntu and his ANT party.  Those ironically  have a re-way entry into every PP activity at administrative level claiming to be allies fighting for freedom wiith PP yet destroying it from within (It’s this group behind malicious abuse to other change agents.)

Mugisha Muntu’s dangerous  political plan is to use PP in a queer alliance. Using this queer plan he want PP and Bobi  support candidates on ANT ticket (actually all PP candidates might end up in ANT as PP is not registered) The plan is after 2021 elections Mugisha Muntu’s unpopular party will have MPs in parliament while Bobi  has none meaning ANT ll be bigger without any practical fight and PP WILL crash in its own game.

Patricia ssewungu is assigned condition of this group which works directly with state agents (She is implementing a regime move to fail Bobi consultation in northern Uganda and even have true Bobi agents arrested or even killed, in a plan that ll involve giving NRM police goons people power  official budges and T-shirts in which they will harm PP.) He is working  in hand with Waisws Mufumbira the former DP_blockdealer exposed and ashamed  before rushing to PP.

In Kawempe North m7 urged Latif Ssebagala to leave his seat and contest for mayor.

For this post  they are grooming a hitherto unknown Salim Sserunkuuma a Rwandan young man whose wife is the woman MP for Nakaseke on NRM ticket!

The regime bought him a plot at Ttula Kawempe from where he operates a crappy business called “EDDY properties” dealing in buying and reselling old staff.

Using the excess state funds he has  set up his own PP task force bought them a car and sprays cash to PP youth in search for MP seat just using Kyagulanyi/PP for his mobilisation while kicking him off the presidential bid! James Mubiru of Rubaga Rubaga north who beat up Besigye is in this catagory

The last known opportunist or PP investor is a one Bukenya Bonny who lives in Kyabando. He is vying for a councillorship post on PP ticket.
Bukenya attends all Bobi’s functions and takes as many photos as he can. He  posts the photos on his  social media hsndles even does live ins targeting change loving Ugandans in the diaspora.

“Buuke-peoplepower” as he is commonly known is known to have received a lot of donations for PP activities and chewed it. He has never approached or even talked to Kyagulanyi and he is not anywhere in PP structures but uses it as a business to enrich himself!

Haj Ssebagala commanded the political biggest wave in Kampala and was dearly loved by people. His major downfall was himself, when he failed to make use of the opportunity ha had at the opportunities life time.

We need stop praising Bobi we need help weed moles off him for the change we want.
“TWAWULE OKUWAGA N’OKUWAGIRA OMUNTU”