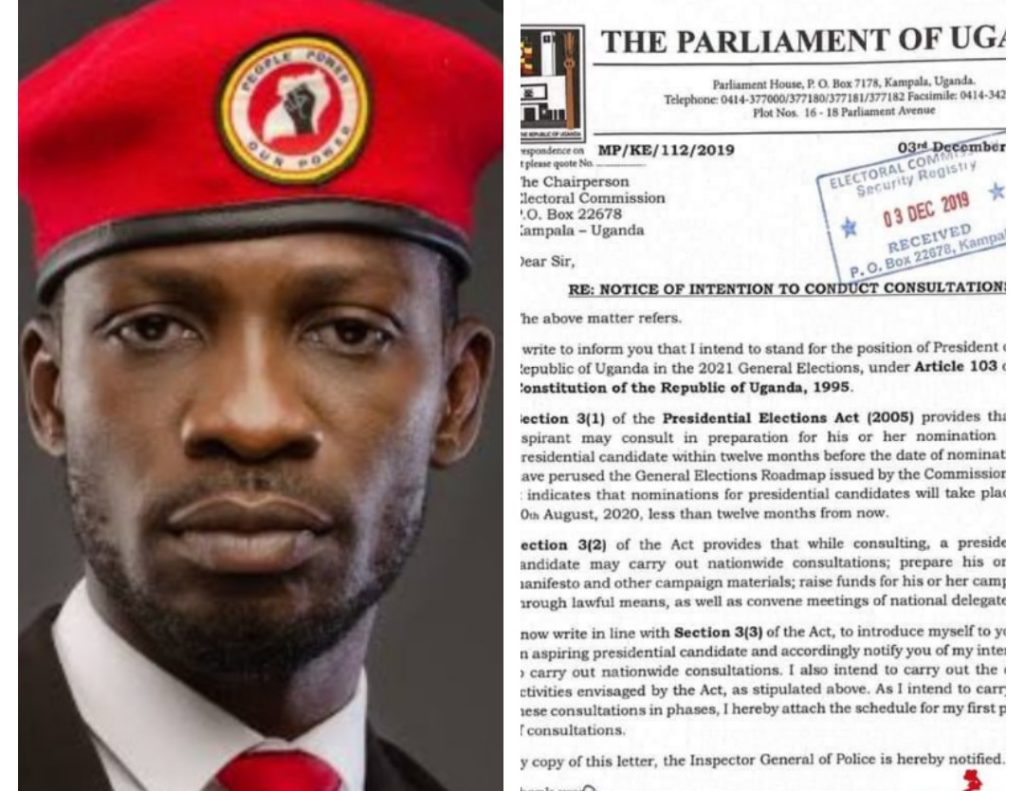 Robert Kyagulanyi aka Bobi Wine, the leader of People Power pressure group, has written to the Electoral Commission, notifying them of his intention to conduct consultations for his 2021 presidential aspirations.

Bobi Wine, who is also the Kyadondo East Member of Parliament, notified the in a letter dated December 3, 2019, in which he reveals that he reveals his plans to traverse the country as he consults his supporters and other Ugandan voters.

Although it’s not clear whether the Uganda police will grant him permission for the nationwide consultations or not, Bobi Wine, was a few days ago in USA and last week traveled to South Africa  as part of garnering support from Ugandans in the Diaspora.

Below is Bobi Wine’s letter to the Electoral Commission;
“RE: NOTICE OF INTENTION TO CONDUCT CONSULTATION
The above matter refers.
I write to inform you that I intend to stand for the position of President  of the Republic of Uganda  in the 2021 General Election under Article 103, of the Constitution of the Republic of Uganda, 1995.
Section 3(1), of the Presidential Elections Act  (2005), provides that an aspirant may consult  in preparation for his or her  nomination as a presidential candidate within 12 months prior to his nomination.
I have perused the General Election Roadmap issued by the Commission and it indicates that nominations for presidential candidates will take place on  August 20, 2020, which is less than  12 months.
Section 3(2), of the Act provides that while consulting, a presidential candidate may carry out nationwide consultation, prepare his or her manifesto and other campaign materials, raise funds for his or her campaigns through lawful means, as well as  convene meetings of national delegates.
I now write in line with Section 3(3) to introduce myself to you as an aspiring presidential candidate and  accordingly notify you of my intention carry out nationwide consultation. I also intend to carry out the other activities envisaged in the Act, as stipulated above. As I intend to carry out these consultations in phases, I hereby attach the schedule for my first phase of consultations.”It should be noted that Bobi Wine captured government and global attention ever since he announced his bid to unseat president Yoweri Museveni in the 2021 General election.