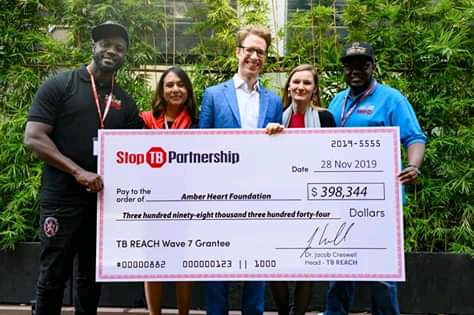 Celebrated singer Moses Sali aka Bebe Cool under his Nongovernmental Organization Amber Heart Foundation, this week received a  grant for a project to fight Tuberculosis in the districts of Kampala, Jinja and Mbarara.

Elite News has learnt that Bebe Cool,  in conjunction with officials from Amber Heart Foundation and donors from America, have launched a project worth USD398,344 (about Shs1.4Bn) which is aimed at sensitising Ugandans about the best ways to prevent the contraction and spread of Tuberculosis.

Bebe Cool, who is the Tuberculosis ambassador in Uganda, recently traveled to Vietnam and on returning he announced that “I am happy to inform you that I officially received a grant of close to $400,000 from Stop TB at a ceremony that took place in Ho Chi Mihn City, Vietnam.”

He said the got the money from Stop TB Partnerships an initiative funded by the Government of Canada and the Bill & Melinda Gates Foundation.

“This grant is a result of a vigorous application exercise that saw The Amber Heart Foundation triumph over 600 applications that had to be chosen from all over the world. This is a great boost to my charity efforts,” he added.

“While for years I have been undertaking different charity works at my personal expense, it feels great when someone else recognises such efforts and decides to chip in. This is a great boast for our health care system.”Sources privy to the project reveal that part of the donated funds will be channeled to equipping medical facilities around the country that operate TB Treatment Centres.The project that was launched on November 28, 2019  will see several TB patients, especially children, benefit from the health campaign.
It should be noted that singer Bebe Cool has in the past gotten involved in various health campaigns, among them raising funds for children suffering from cancer and heart problems.