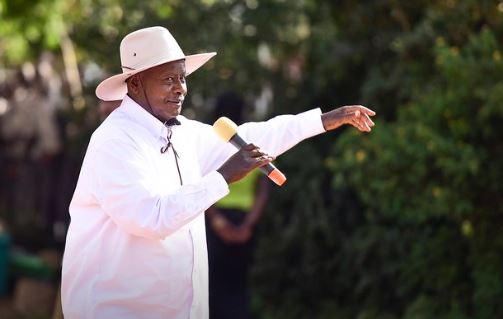 Despite massive outcry from the business community, President Yoweri Museveni  has Sunday reiterated his earlier directive about closing bars, night clubs and other hangouts  as a way of mitigating the prevention and spread of Coronavirus.

The President reasserted his position closing on bars, night clubs, churches, mosques, school, universities and other institutions during his second national address on  Coronavirus, during which he revealed among other things that Uganda had banned all travellers entering and leaving the country, and urged Ugandans to desist from using public means of transport.

“Night clubs and bars are not workplaces. They are ad-hoc and anybody comes in and that’s where the danger is. Therefore, they should all be closed. Unlike offices where they know each and everyone who comes in and leaves”

In his address, the President also asked the public to desist from shaking hands or using elbows while greeting each other. He said Ugandans should wash their hands with soap all the time and wave at each other to avoid physical contact which is the fastest way of spreading the virus, avoid touching their nostrils, eyes and lips since these are sensitive spots through which the Virus can access our bodies.

He advised school children to stay home and avoid loitering around village trading centers, since this will expose them to infection. Museveni also acknowledged that he had been informed about a Coronavirus patient in Uganda who recently returned from Dubai, noting that the situation had been adequately handled by the ministry of health and the Patient had been isolated for treatment.

Here below  is a statement issued by President Museveni about  the new directives on fighting the spread of Coronavirus;

Countrymen and Countrywomen, Greetings to you all, again. A few days ago, on the 18th of March, 2020, I addressed you on the dangerous situation of the corona-virus. Up to now, Uganda, by God’s mercy, has not yet recorded even a single case of this terrible virus. Nevertheless, we must fine-tune our strategy against this enemy.

In my address of the 18th of March, 2020, I had directed the Health authorities to allow people, Ugandans and non-Ugandans, coming into the country from abroad, even from category I (one) as well as the others. However, partly due to the indiscipline of some of the people, we have now deiced to review that position and tighten preventive measures.

Consequently, we have decided to take the following measures:

1. To prohibit all in-coming passengers whether by air, land or water. In order to actualize this, we have decided to prohibit all passenger-planes, coming from outside Uganda, from landing at any of the Airports of Uganda. Only cargo planes will be allowed to fly into and out of Uganda. Also to be allowed in are planes on account of emergency or the UN planes involved in the Relief work and other UN operations as will be agreed with the mandated Government authorities.

The crews of these cargo or UN mission planes will be accommodated in locations agreed with the concerned authorities. Domestic flights will continue for now. In conformity with International Law, this prohibition of in-coming passenger-planes will come into force 24 hours from mid-night tonight, the 21st of March, 2020.

2. Pending the evolving of an EAC Health Response Plan to the Pandemic by the East Africa Ministers of Health, no person, Ugandan or otherwise, will be allowed to enter Uganda by land or water except for drivers and accompanying crews, not exceeding 3 persons, for cargo transport vehicles ─ trailers, lorries and other cargo vehicles.

No buses, mini-buses, salon cars or boda-bodas will be allowed in the country. Also, pedestrians, walking on foot, or bicycle rider will not be allowed to enter Uganda or to enter Uganda by road, path or water; nor will they be allowed to exit by those means. I call upon the LCIs in the border regions to work with the security forces to report and promptly confine anybody who comes in from the neighbouring countries without following this order.

This measure will come into effect starting 1200 hours, tomorrow the 22nd of March, 2020, Sunday. These measures are backed by the force of law as mandated by the Public Health Act and the Statutory Instrument signed by the Minister of Health. Anybody violating any one of them will be prosecuted and may suffer imprisonment or pay a heavy fine. This virus can cause a lot of deaths. Yet, it is very easy to avoid.

Remember that the crucial elements about the virus’ ability to infect are two:

(1) A sick person sneezing out (kwetsyamura) or coughing (kukororra) near you and the viruses of his invisible mucous or spittle being inhaled by you; and

(2) An infected person, after carelessly blowing his nose, touching a surface which you, then, also touch and carelessly, again touching your mouth, nose or eyes without washing your hands first with soap. That is all.

Otherwise, the virus cannot enter your system. I must also inform the Ugandans that I do not share excessive pessimism of some actors regarding the economy and its performance as a consequence of this virus. Yes, some sectors will definitely suffer.

These are sectors of tourism, entertainment, sports etc. However, the sector of manufacturing, if we act correctly, will boom. Uganda has been importing products to the tune of US$7billion per annum. With the exception of petroleum products, this is a chance to end the haemorrhage caused by traders who go to foreign countries and turn our country into a supermarket for foreign products.

Now that corona has blocked these products, we are going to make them here. The Government will work out a package to actualize that. All these measures are in addition to what I previously said on Wednesday last and will be in force for 32 days from Wednesday.

The SOPs (Standard Procedure Operations) regarding the cargo transporters will be put out by the Ministry of Health. The young people should be very careful. Previously, there was a belief that young people can easily survive this virus. However, information is beginning to come in that quite a bit of the people who are dying are young people. I thank you.