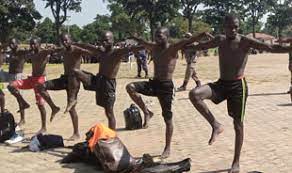 A prospective recruit to the Uganda Wildlife Authority-UWA has died after participating in a 5 kilometer fitness run in Gulu city. The deceased has been identified as 20-year-old Jacob Opiyo, a resident of Kitgum District.
He was pronounced dead at Gulu Regional Referral Hospital on Wednesday evening where he was rushed for emergency treatment. Opiyo reportedly collapsed shortly after completing the 5 Km run in the ongoing recruitment of UWA rangers.
Bashir Hangi, the UWA Communications Manager confirmed Opiyo’s death to Uganda Radio Network in an interview. He said the deceased became dizzy after successfully completing the 5 Km race and was rushed to Gulu Regional Referral Hospital where he died later.
He cautioned those interested in joining UWA not to commit themselves to go through the physical exercises if they have underlying ailments or are unfit. “This is not a do or die affair. People with ailments should not come for this exercise, it’s hectic and the actual training is more hectic,” said Hangi.
According to Hangi, the applicants are always briefed and informed of the repercussions prior to their involvement in the physical drills. He, however, noted that many don’t open up about their conditions. At least 627 applicants turned up for the ranger’s recruitment at Kaunda grounds in Gulu City against the 48 slots UWA reserved for Acholi Sub-region.
Three other recruits also died during the same recruitment exercise in Kasese District on Monday. UWA is seeking to recruit more than 800 rangers countrywide during the exercise that started on July 4 and is expected to end on July 8 this year.