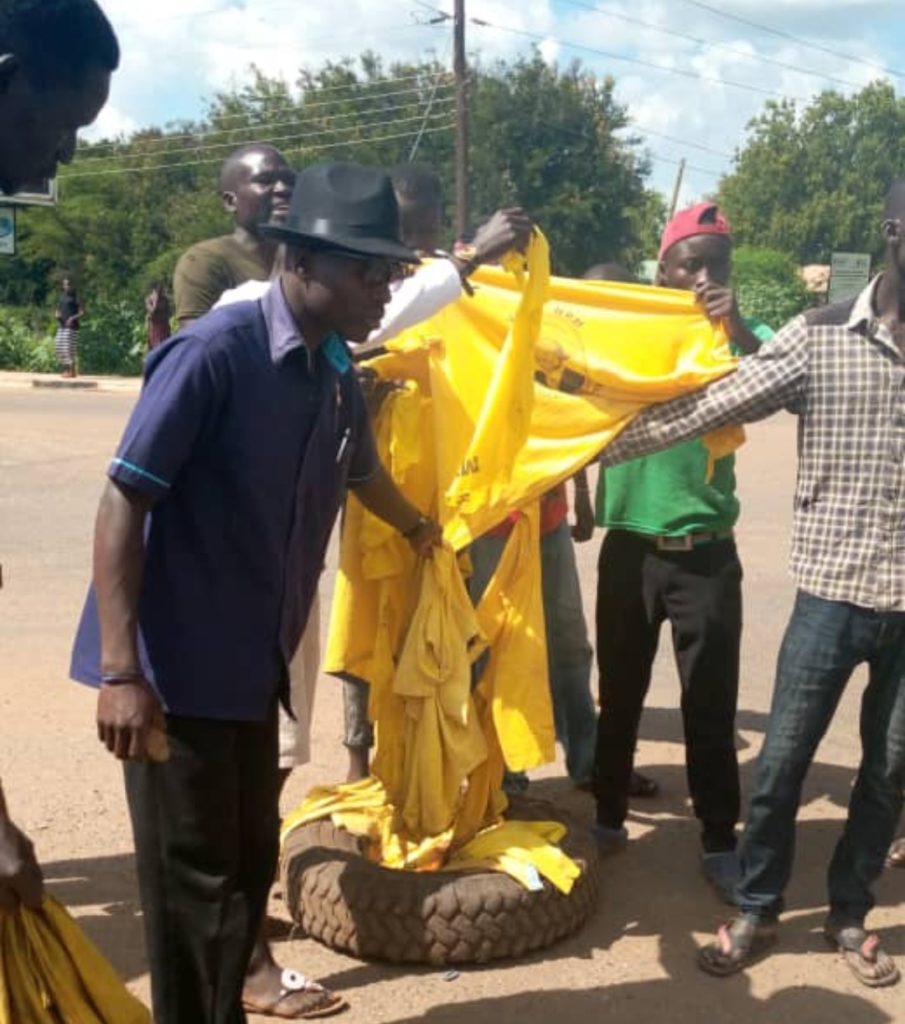 Angry residents of Moroto Municipality have today burnt several National Resistance Movement (NRM) T-shirts as they protested against the murder of the Sub-county LC Chairperson, who was on Tuesday shot dead by Local Defence Unit (LDU) operatives.

Dan Apollo Lyomo was shot dead by Karimojong LDUs who were trying to retrieve animals that had been impounded by the army in Kidepo grazing area.

Apollo, who was the Rupa Sub County LCIII chairperson,  was shot during the scuffle that ensued between civilians, the army and the LDU operatives,  after the trigger-happy LDUs opened fire randomly.

Apollo was the elder brother of former government  top spy, David Pulkol,  who was the head of the Internal Security Organisation (ISO).

However, to date the police in the area have not arrested any of the killer Karimojong LDUs or issued a statement about Apollo’s death, which prompted residents to stage protests as an expression of their dissatisfaction about the brutal murder of their LC III Chairperson.

During their protests, the youth in the area burnt hundreds of NRM T-shirts threatening to withdraw their support for the Party on grounds that it is presiding over a government that has failed to manage its security personnel who have resorted to killing the citizens they are supposed to protect, with impunity.

“The killing of our leader was intended by the UPDF officers who had threatened his life all along,” said one of the protestors, who preferred anonymity, before disputing the UPDF statement which alleges that the LCIII chairman was shot by an LDU personnel.

The Protester claimed that he and his colleagues saw an armed personnel donning UPDF uniform opening fire at their leader.

However,  when contacted for a comment about the incident, Maj Telesphor Turyamumanya, the 3rd Division Spokesman on Wednesday told the media that UPDF was investigating an LDU personnel over the shooting.

“What I can tell you is that we have launched an investigations into the matter. Whether they are arrested or not is another issue. The truth is that we are investigating the matter,” Maj. Turyamumanya said when asked whether the LDU personnel was arrested.

However, he didn’t reveal why the police and UPDF  who were at the scene did not react immediately by arresting the alleged killer LDUs and instead let them go away with the animals.