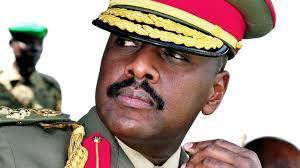 As usual you have been on rampage, throwing tweets around in which you make political statements regarding your futile & empty dream of capturing power.

In your recent tweets you were seen ridiculing the person of Gen Mugisha Muntu, to the extent of calling him a sober non performing commander who purportedly wasted the nine years he was a commander. You also regreted why Jet Mwebaze wasn’t instead appointed the commander of the army that time and went on to refer to ANT as “a small collapsing party”

Gen Muhozi, first of all, you can’t regret a decision you never made, if the commander in chief Gen Museveni has never regreted appointing Muntu, why you?

Secondly, you need to know that the retired comrades you are ridiculing are the ones who brought the peace you are enjoying. Mugisha Muntu that you are abusing was shot in the chest during the bush war & he almost lost his life. By that time you were a kid somewhere in Sweden eating sausages & defecating on yourself, where would you get the insanity to abuse such a man who fought for the peace that you enjoy?

Anyway do you even recognize that the war that brought your family into power claimed tens of thousands of lives including men in uniform whose blood you aught to honor?

Thirdly, the ANT you call a small collapsing party is barely three years old as compared to NRM which Museveni dates back to the 1960s, why would you get headache because of a three year old party?

Again, do you recognize that the so-called NRM achievements & positives contribution to this country were efforts of the people you ridicule the likes of Col Besigye, Gen Muntu, Gen Sejusa, Gen Tumukunde etc & the moment they left NRM, it became diluted & it’s now left mainly with dregs & mediocres like those people cheering a naked prince that he is smart?

But why can’t you read history & see how the undemocratic leaders ended? Have you read about Gaddafi of Libya, Mobutu of DRC, Habyarimana of Rwanda, Siad Bare of Somalia, Hosni Mubarak of Egypt, Blaise Compaure of Burkina Faso, Robert Mugabe of Zimbabwe, Omar El Bashir of Sudan, Sadam Hussein of Iraq, Laurent Gbagbo of Ivory Coast, Ben Ali of Tunisia to mention but a few?

Do you want to pretend, that Museveni is more smart than those people? Didn’t they have mighty armies even stronger than UPDF? Or have you learnt nothing & forgot nothing?

I hear you tagging yourself on the youth, by the way you are not a youth, by 2026 you will be 52, I don’t think you can claim to be a youth at 52, no! You are a Muzeyi and we the youth shall not support you at all..

Gen Muhozi; every time you are writing you say; my father Muzei Museveni my uncle Kagame, my wife, my mother, my dad my what…nio nio nio nio, nio nio nio nio etc, at 48 years what have you achieved? How comes you are still pampered in your fathers armpits at 48?

By the way like Hon Semuju said, better tell your father to list you all his properties like farms, hotels, arcades etc to inherit. if you think Uganda is your father’s property to inherit, it is not. Uganda belongs to 45 million Ugandans & you have equal shares like any other Ugandan. It is not your property or your fathers estate, if you think it is, the Banyankole would say that “ogahwe” meaning that “give up”!

Lastly the ANT party that pains you will not collapse, its a party anchored on strong ideological pillars. It’s a party that has the best vision for this country.

It’s a party that believes in democracy against dictatorship, reconciliation as opposed to crushing enemies, dialogue as opposed to violence, service before self as opposed to self service, tolerance as a way of winning opponents other than coercion.

It is a value based party with members who are conscious & disciplined, well purposed and steadfast, go slow on it before you get overwhelmed.

If you are wise enough, pray that ANT takes over from NRM because, it can create an environment where criminals like you can have a privilege of being paraded to court to face the law.

if you are unlucky and another group takes over, the angry citizens might drag you on tarmac like late Gaddafi & eat you alive like hyenas or scavengers feasting on a dead lion and you may even die before reaching prison!