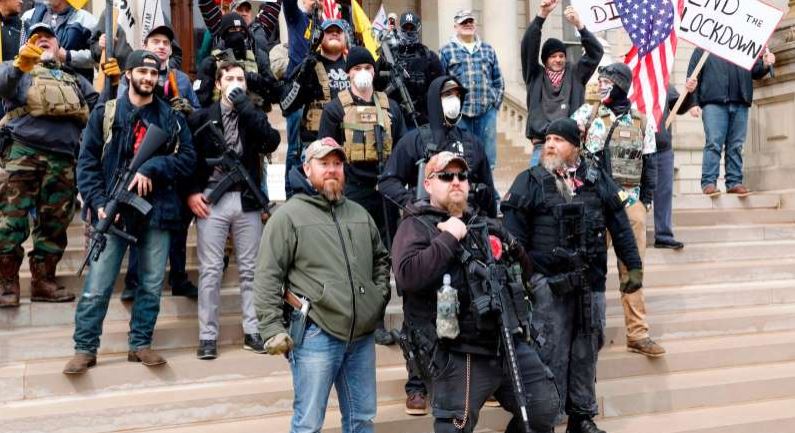 There is a standoff in the United States of America currently after several Americans coming out to compel the government to lift the Coronavirus (COVID-19) lockdown.

As you read this, thousands of people are preparing to attend protests across the US in the coming days, as a rightwing movement against stay-at-home orders, backed by wealthy conservative groups and promoted by Donald Trump, continues to take hold.

Conservative activists are demanding governors lift orders designed to stop the spread of the Coronavirus, despite the recommendations of public health officials. Trump, who has clashed with Democratic governors over how soon to reopen the US economy, tweeted his support on Friday, in an unprecedented endorsement of civil disobedience by a sitting president.

Many of the planned rallies have been inspired by a protest at the Michigan state capitol on Wednesday, which was attended by thousands.

The state’s governor Gretchen Whitmer ordered people to stay at home and non-essential businesses to remain closed during the COVID-19 outbreak.

More than 630,000 people in the US have been infected with the virus, which causes only mild symptoms for many but can lead to severe complications or even death for others.

Thousands of people in the US have died, including more than 1,900 people in Michigan. Some 884 of these were in the city of Wayne and another 330 in the township of Macomb, according to data from Johns Hopkins University – which is tracking the outbreak.

Protest organisers had asked people to remain in their cars and cause traffic gridlock while holding signs in their vehicles to make their views known.

But many protesters ignored this, making their way to the state Capitol in Lansing on foot to criticise the stay-at-home order, which has been extended to 30 April.

Among the signs protesters held were those saying: “We are not prisoners” and “Michigander against Gretchen’s abuses”. Others described the order as “tyranny”.

Meshawn Maddock, a member of organisers Michigan Conservative Coalition, said: “This arbitrary blanket spread of shutting down businesses, about putting all of these workers out of business, is just a disaster.

“It’s an economic disaster for Michigan and people are sick and tired of it.”

However, Governor Whitmer, a Democrat, criticised the protesters for putting public health at risk, as they were standing close together without wearing masks.

She told reporters she had seen someone handing sweets to children with their bare hands, adding: “We know that this rally endangered people.

“This kind of activity will put more people at risk and, sadly, it could prolong the amount of time we have to be in this posture.”

She said she was aware of the pain caused by the restrictions but that they are necessary to stop the spread of coronavirus.