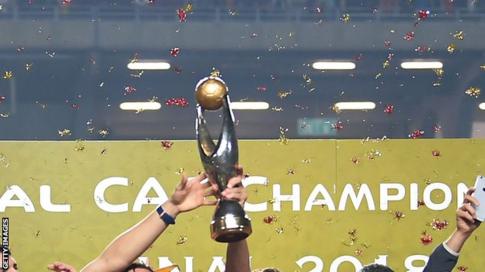 TP Mazembe of the Democratic Republic of Congo and South Africa’s Mamelodi Sundowns survived scares on Saturday to become the first qualifiers for the African Champions League quarter-finals with two group matches still to play.

Five-time champions Mazembe fell behind after eight minutes against Primeiro de Agosto of Angola in Lubumbashi before winning 2-1.
Sundowns were 2-1 winners over Algeria’s USM Alger who missed a late penalty in Pretoria when Mohamed Meftah’s shot struck the woodwork.

Defending champions Esperance of Tunisia are close to a last-eight place after stretching an unbeaten Champions League run to 18 matches by beating AS Vita Club of DR Congo 2-0 in Kinshasa.

Fellow Tunisian club Etoile du Sahel came from behind to overcome Al Hilal of Sudan 2-1 in Omdurman and Petro Luanda of Angola and Wydad Casablanca drew 2-2 in Luanda.

Platinum of Zimbabwe, the only club without a point going into the fourth round of group matches, held record eight-time champions Al Ahly of Egypt 1-1 in Bulawayo.

Just hours after Mazembe named Serb Dragan Cvetkovic as their technical director, they were left stunned when Cristovao Mabululu scored his sixth CAF goal this season for Primeiro.

Stubborn Angolan resistance then kept the Congolese side at bay until Chico Ushindi and star forward Jackson Muleka netted within nine minutes during the second half to turn the tide.

Mazembe top Group A with 10 points, Zamalek have seven and Zesco and Primeiro two each ahead of a top-of-the-table clash in Cairo on 25 January.

All the goals in Pretoria came late in the opening half with Thapelo Morena putting hosts Mamelodi Sundowns ahead against USM Alger, Aymen Mahious equalising and Sibusiso Vilakazi scoring the winner.

Meftah sent Uganda goalkeeper Denis Onyango the wrong way with his spot-kick, but the ball hit the crossbar and flew over to leave 2015 runners-up USMA still looking for their first win after four group matches.

Hilal led through Waleed Bakhet, but Omer Hassan conceded an own-goal before half-time and they were reduced to 10 men when Nasr Eldin Sheighel was sent off soon after Msakni scored.

Etoile also finished with 10 men when goalkeeper Makram Bediri was sent off during nine minutes of stoppage time.Victory took Etoile back to the top of Group B on nine points with Ahly (seven), Hilal (six) and Platinum (one) behind them.

OA stoppage-time goal from Hamdou Elhouni sealed maximum points for holders Esperance as they secured a 2-0 win over AS Vita Club and lifted them to 10 points in Group D followed by Raja (seven), Kabylie (four) and V Club (one).On Friday, JS Kabylie of Algeria and Raja Casablanca of Morocco drew 0-0 and Zamalek of Egypt triumphed 2-0 against Zesco United of Zambia. Group winners and runners-up qualify for quarter-finals