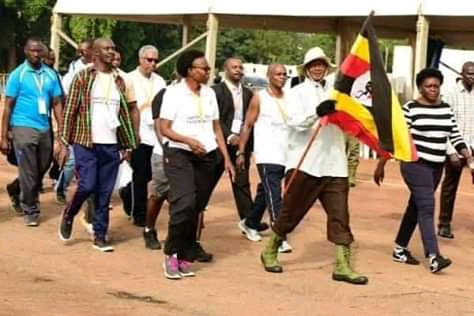 Kampala has been a bustle of action-packed activities all day today, with President Yoweri Kaguta Museveni and Peoples Government president  Col. Dr. Kizza Besigye struggling to be the ‘Star’  in the war against corruption in Uganda.

The day started with president Museveni appearing at the heavily guarded constitutional square in Kampala early in the morning, from where he led patriotic Bazukuly, government officials, military and police officers plus several other people in the Anti-Corruption Walk.

They walked from City Square to Kololo Independence grounds where Museveni gave a speech, castigating corrupt government officials, who he described as parasites.

However, while Museveni and other government officials ranted against corruption at Kololo, Besigye, who had organised a parallel Anti-Corruption March from his offices at Katonga Road, was under siege at his home in Kasangati.

But while heavily armed policemen laid siege outside  Besigye’s home, somehow, he managed to escape from them and behold! He appeared in Mpererwe, driving in trademark white Land Cruiser, which he had armoured with steel bars, to protect it from being smashed by police.

That didn’t save him either, the police quickly gathered and called a towing truck, which towed away Besigye’s vehicle to yet to be identified police station, without allowing him to walk against corruption.

Our dear readers, here is the day’s action in pictures!