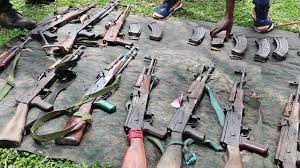 “Such separate recoveries and previous ones show positive energy and tireless efforts by commanders, intelligence officers, and troops who are conducting simultaneous cordon and search operations, effecting deployments in towns and suspected corridors to pacify the sub-region,” said the Third Division Second in Command, Brig Gen David Mugisha.

The Commandant Anti-Stock Theft Unit, Commissioner of Police, Elias Kasirabo stressed that the forces will maintain the operational tempo. He lauded the forces and local leadership for their right direction in returning normalcy to the region.

“The operations were intelligence-led targeting prime suspects from Nadunget market, whom we interviewed and managed to make recoveries peacefully,” he said.

In a period of ten days, the intensified cordon and search operations across nine (9) districts of the Karamoja Sub-region, the Joint Security Forces have led to the arrest of 3592 suspects, screening, and the release of 2298 persons, and prosecution of 396 suspects. Another 898 suspects are still in custody and 22 pieces of armed forces uniforms have been recovered.

“Cases of robbery and murder by some of these criminals due to deadly weapons will be taken on and a charge of compounding a felony preferred,” said Chemusto, noting that suspects are screened before prosecution to show transparency.