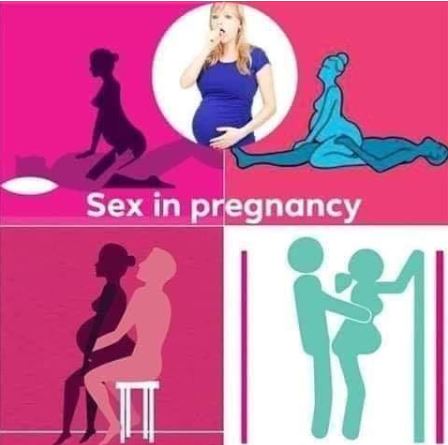 Although most people do not know, having sex during pregnancy is good for both you and your baby: It can help you sleep better, lower your blood pressure, and even make you happier!

Some people think that if you have sex during pregnancy, the semen will spill on the baby and might kill it OR the Whopper might be hitting the baby’s head and affect it OR contractions from an orgasm might cause miscarriage. Well, these are all misconceptions.

However, the only exception to sex during pregnancy is if your doctor or midwife has told you specifically that you that it might be a problem due to vaginal bleeding, recurrent miscarriage, cervical incompetence or anything else that poses a risk.

Now let’s talk about the benefits of having sex when you’re pregnant.

👉 1. Sex during pregnancy is a form of exercise. It can help you stay active and healthy. You burn out up to 50 calories in just half an hour and this is good for both you and your baby.

👉 2. Sex is a great way to prevent high blood pressure during pregnancy. It can reduce the risk of preeclampsia. Sperm contains a special protein that increases the chances for a successful pregnancy

👉 3. Sex reduces pain and discomfort. This is because of the feel-good hormone (oxytocin) which is released when you have an orgasm. Oxytocin can increase your tolerance for pain. After sex, you may notice you don’t even feel that achy back or crampy leg anymore.

👉 5. During pregnancy, sex offers the couple or partners the opportunity to explore certain sex positions they may not have tried before. You may even later prefer those positions as your favorites even after delivery.

👉 6. Sex creates a bond between the partners as the two people do not have to sexually starve for over 9 months. When sex continuous during pregnancy it doesn’t break the bond between them.

👉 7. Pregnancy can be an emotional roller coaster, as you might sometimes find yourself feeling anxious, weepy or stressed, but sex can be a great way to decompress and just be in the moment.

👉 10. Sex is even more enjoyable during pregnancy especially for the woman because the blood flow in her vulva.

👉 11. Sex can help you feel more relaxed. So you might find yourself tossing and turning a little less afterwards. The rocking can even calm your baby to sleep, which could mean fewer kicks while you’re trying to doze off.

👉 12. Sex during pregnancy can make delivery easier, this is because the sperm is rich in hormone known as prostaglandins which helps in uterus contractions.

Take note that you should not feel compelled to have sex. Every woman’s body is different. Not every pregnant woman feels like having sex. If you feel like it and you’re comfortable with it, go ahead.

Sex during pregnancy is not harmful and can continue throughout the nine months of pregnancy unless doctor has said otherwise.