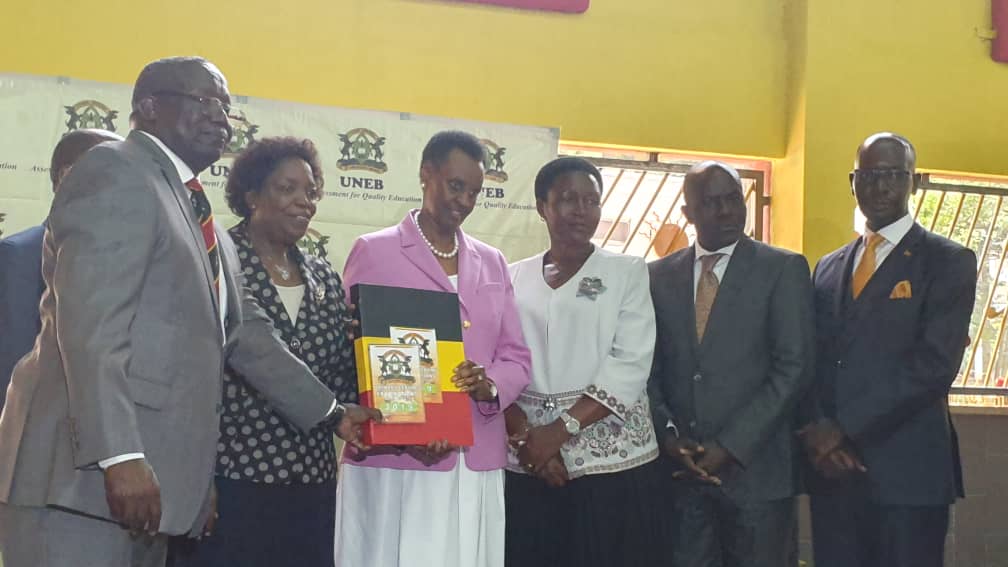 By Keefa Nuwahereza
The Uganda National Examinations Board today released results of the 2019 Primary Leaving Examinations, at Kampala Parents School, during a function at which First Lady Janet Museveni was Chief Guest.

The UNEB Secretary Dan Odongo handed over the PLE results to  Lady Janet Museveni, who is also the Minister for Education and Sports.

The board Executive Secretary Odongo said at least 318,155 candidates scored a second division while a total of 140,420 passed in third division.

“A total of 89,332 have passed in the fourth division while 66,152 accounting for 9.6% are ungraded,” he said, before adding that the performance of this year has improved significantly compared to the performance of pupils who sat in 2018.

Earlier, the board chairperson, Ms Mary Okwakol had said candidates at PLE continue to increase every year.

“More girls have continued to remain in school at least up to completion of PLE.Parents are partly responsible for ensuring that pupils remain in school. The results indicate that performance has improved and more pupils will join the post PLE level,” she said.

She added that 68.2% of the candidates who sat PLE were beneficiaries of Universal Primary Education (UPE), a government programme.
“We have continued to record increases in candidature every year. Once again, we registered more girls for this examination. We have observed this trend for the last five years. This could be because of increased sensitization of the need to keep the girl child in schools,” she said.

Ms Okwakol reiterated that PLE exams did not leak as had been reported by a section of the media.
“The purported leaked PLE exams papers were fake and they misled the teachers.