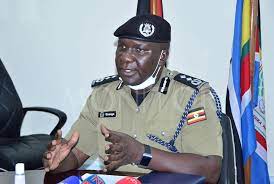 A joint security operation targeting a suspected training camp for Allied Democratic Forces (ADF) rebel group has
led to the arrest of 16 people in Mityana.

Following the November 16, 2021 twin blasts targeting the Central Police Station in Kampala and Parliamentary Avenue, security has since then targeted suspected terror cells in various parts of the country.

According to the Police Spokesperson, Fred Enanga, last week, a joint team from the Chieftaincy of Military Intelligence (CMI) and Police counter terrorism unit carried out a raid at the home of Jimmy Kayiza in Busimbi, Mityana district.

“This was being used as a training hub for ADF rebel activities. A total of 16 suspects were arrested whereas military-like attire, jungle boots, electronic gadget, mobile phones were recovered,”Enanga said.

He noted that the group has since been transferred to the Special Investigations Division in Kireka to be interrogated over participation in subversive activities.

Enanga also noted that another suspect who was part of the group from the Luweero home that was raided last week was also arrested in Kampala. “One of the remnants of the Luweero terror cell called Charles Ssemujju was got from Busega flyover where he was stranded after escaping from Luweero.”

Enanga said that Ssemujju 24, had come to Kampala in January this year from Ssembabule before he was “recruited” into terror activities by ADF agents and later taken to Luweero from where he has been undergoing training.

“While looking for a job in Makerere Kikoni he was lured into these subversive camps and taken to Luweero from where he has been undergoing training since February.” He said

They also arrested Akbra Kabanda said to be the commander of the camp and is believed to have been exonerated after denouncing ADF terrorist activities.

The security team also recovered a 30.5 feet deep underground hole that they said was constructed secretly to be used for terrorist training activities whereas eight under age children were also found and these are suspected to have been undergoing radicalization into terror activities.

At the suspected training facility, rolls of wire, a short gun, razor blades, sulphuric acid powder and other assorted items that security said are used in the manufacturer of improvised explosives were recovered.

Following last year’s blats, security has intensified operations targeting sleeper cells for ADF said to be in various parts of the country, especially in the central.

Police spokesperson, Fred Enanga on Monday confirmed that many of these sleeper cells are still in existence but will be raided.

“We have evidence to show that there are cells trying to recruit and radicalize members into the rebel ranks but we are prepared for them. These operations show we are in control of everything,” Enanga said.